I find it very interesting that some of the most popular foods today started out with very humble beginnings, and were the foods of the peasants and the poor.  Irish stew definitely falls into this category.   Today, Irish stew is good comfort food that you can find in any Irish pub, but it grew out of necessity.  Irish stew was created by using very simple ingredients that were readily available and could be thrown together and cooked in one pot.  Originally, mutton was used instead of lamb or beef.  Mutton is old sheep.  It was readily available because people kept their sheep through old age for their wool and the milk.  Because mutton is older sheep, it is also tougher meat, which meant it needed longer cooking times.  When the Irish started to emigrate to the United States, lamb was not as popular here, but beef was plentiful, so beef was substituted for the lamb and mutton.

The potato was brought to Western Ireland via South America and the New World in the 16th century and has been a vital ingredient to Irish cooking ever since.  The potato is probably the most valued ingredient in all of Irish cooking.

The method of stewing foods is one of the oldest cooking methods, dating back to the times of the Roman Empire.  Stewing foods became popular to the Irish in the late 19th century, during times of turmoil and poverty and was an easy way to prepare foods with minimal effort and minimal ingredients.  It became a way of survival in tough turbulent, economic times.  Often times, the stews were cooked in stouts or other alcohols because clean water was not as readily available.  By cooking with the stouts, it not only added flavor and moisture, but also added some much needed nutrients as well.  The most basic version of Irish stew was mutton, potatoes, and onions.  Root vegetables, such as carrots and parsnips, were added if they were available.  Today there are many variations to Irish stew, but it always has potatoes and onions, and is still very true to its peasant roots, no matter where you go.

Being true to the Irish in me, and believe me, I have quite a bit of the Celtic blood flowing threw my veins, I used leftovers.  When Larry smoked the ribs, there was no way we could eat them all in one sitting, so of course, we had some leftover.  I used the meat from the beef short ribs for my stew, so I was able to cut out one step of the stew-making process by not having to cook my meat again.

1 14 oz can Guinness or other dark stout

Season the meat with salt and pepper and brown in the cooking oil.  When the meat is completely browned, place it a slow cooker.  Add all the vegetables and potatoes to the meat.  I like to mix everything up together to ensure everything cooks and is flavored evenly, but you do not have to.

Mix all the wet ingredients, the bay leaves and the cornstarch together then pour them over the meat and vegetables.  Again, I like to mix everything together, but this not necessary if you do not want to. 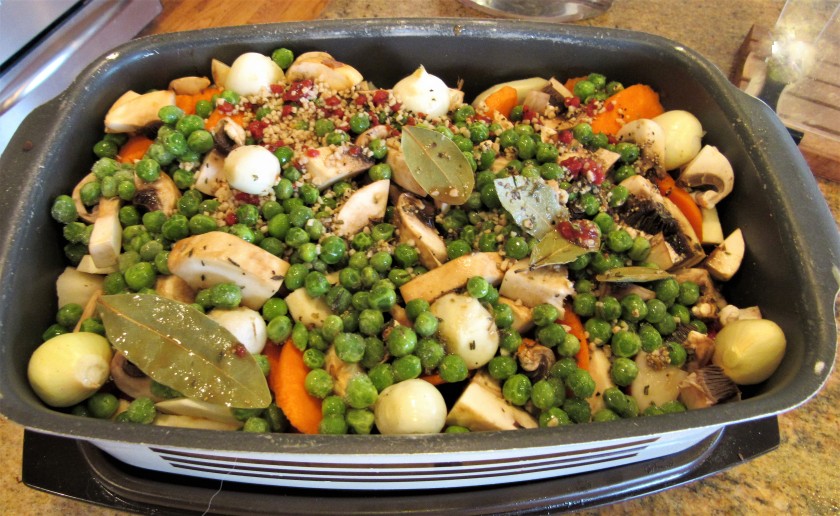 Once everything is combined in the slow cooker, cook it at a medium temperature for about 4 hours, stirring occasionally.  When it is ready, and the meat and vegetables are tender, remove the bay leaves and dish it up.  I served my Irish stew with some Irish potato cakes (stay tuned for the recipe), warmed bread and my wine choice was a bold and fruity red blend.  Now to be completely traditional, you could serve it with more Guinness or Irish stout, or Irish whiskey too.  Slainte!