The word biscuit has a completely different meaning her in the United States than it does in many other parts of the world.  In England, and all her “progeny”, Italy, Argentina, and many other places, biscuits is the term used for what we Americans call cookies.  Biscuits in these parts of the world, refer to cookies in general, not really any specific kind of cookie.  The word biscuit or biscotti derives from the medieval Latin term biscoctus, which is a term that was used to indicate something was twice baked.  Back in the days of the Roman legions, baked goods were often twice baked and dried to preserve them, and were a staple that was used to take on long journeys or wars.  Biscotti, which is the plural of biscotto, are twice baked Italian “cookies” that originated in the Italian region of Prato.   Cantucci is another name used for biscotti, but it is most often used in Tuscany or other specific regions of Italy and Argentina.  Cantucci today usually refers to variations or limitations of the original recipe.  Today, there are many, many different variations of the these deliciously dry oblong biscuits, known as biscotti, that have become a worldwide favorite.

The other day when I made my chocolate hazelnut semifreddo Rich and Decadent Chocolate Hazelnut Semifreddo we all decided it needed something else to help balance out all the richness from the semifreddo.  So I thought and Italian semifreddo needed an Italian cookie or biscotii to go along with as the perfect choice.  Believe me, it definitely was too.  These two Italian desserts are perfect partners for each other.  Whenever I make biscotti, I almost always dip them in chocolate too.  This is optional of course, but I love chocolate, and I think more is often better.

Add the sugar to the water and boil until it becomes a golden caramel color.  You have to really watch this because once it starts to turn color, it can burn very quickly and easily.

Add the pecans to the caramel immediately after it starts to turn color and caramelize and thoroughly mix together.  Then pour the pecans and caramel mixture onto a cookie sheet that has been coated with olive oil.  Let the pecans dry and crisp up before chopping and using.

While the pecans are cooling, make your cookie dough.

I have been having a real hard time finding grated orange peel lately, but I find orange essence works just as well.  You can also make your own orange zest by shaving off the rinds to about 4 oranges and then chopping very, very finely.  I find I can never get my zest fine enough though, so I usually buy it.

Mix the flour, baking powder and spices together and set aside.  Then mix the sugar, eggs, egg yolk, olive oil and orange essence together.

Chop the pecans into small pieces.  Save the broken pieces of the caramel for later.

Mix the eggs together in the mixer with the paddle attachment until they are thoroughly blended together.  Add half the flour and mix in, then add the other half of the flour and mix.  Do not over mix.  Once everything is well blended, add the chopped pecans and fold into the dough.

On a lightly floured surface, divide the dough into 3 equal parts, and roll and shape into a long tubes, about 12 inches long and slightly flatten.  Place the tubes about 2″ apart on a baking sheet lined with parchment paper and bake for about 25 minutes or until the dough is set.

Once the dough is set, remove the biscotti from the oven and reduce the heat to 325* F and allow to cool for about 10 minutes.  Once they have cooled, slice them at a diagonal into slices about 1/2 thick, with a serrated bread knife.

Return the biscotti back to the oven to continue baking for another 20-25 minutes or until they are dry and crisp.  Once the biscotti has cooled completely, after the second bake, you can dip them in chocolate if you desire.

Now as you all know, I love any kind of cookies, and I could easily have eaten these all on their own and been perfectly content.  But I really wanted to serve them with the rest of my semifreddo.  I layered the dessert with the semifreddo first, then a dab of whipped cream, followed by a slice of biscotti and topped with the caramel pieces from the caramelized pecans.  The result …. decadently delicious! 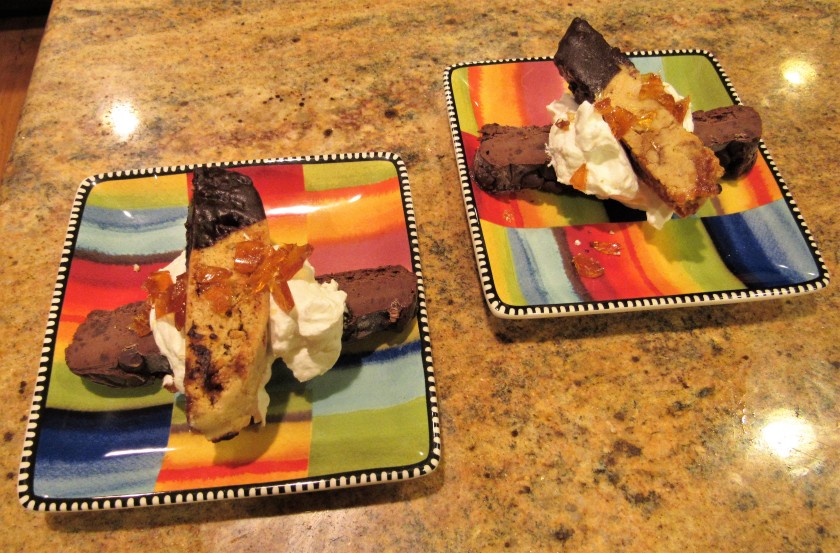