A strudel is a type of sweet or savory layered pastry with a filling inside. The history of strudel dates back for hundreds of years, it was made as an easy yet satisfying meal by the poor. The name Strudel comes from the German word for “whirlpool” or “eddy”. The rolled version of the pastry looks like the inside of a whirlpool.

Strudel is most often associated with Austrian cuisine, but is also a traditional pastry in the area formerly belonging to the Austro-Hungarian Empire. Strudel gained popularity in the 18th century through the Habsburg Empire (1278-1780). In these countries, apple strudel is the most widely known. Apple strudel is considered to be the national dish of Austria, and is the official state pastry of Texas. The Viennese are the ones who made this dish famous with their delicate, thin layers of dough and sweet, tart apple filling.

It was the Turkish Baklava pastry, introduced into Austria in 1453 that laid the foundation for strudel. Gradually strudels with different fillings were created. The oldest strudel recipe is for a milk-cream strudel. It was handwritten in 1696 and the original can be found at the Viennese City Library.

I love strudels of all kinds, but working with phyllo or fillo dough is still something I need to work on and practice with.  I am admitting a flaw …. I am not as skilled as I would like to be with phyllo dough.  🙂  But, I share both the good and the bad, and sometimes the ugly, with all of you, so here is my attempt at a mushroom strudel.  I think my oven may need to be recalibrated, because I had my strudel in for almost double the time it was supposed to bake, and it still looked a little pale.  But fortunately, looks aren’t everything.  It still tasted very good.

I lb mushrooms, sliced thin – I used baby portabellas, but you can mix them and match them with other types of mushrooms however you like.

6-8 TBSP fresh chopped herbs of your choice – I used thyme, oregano, and rosemary

1/2-3/4 cup shredded mozzarella cheese, or cheese of your choice

3-4 sheets of phyllo dough, defrosted according to package directions

Saute the mushrooms, garlic, and shallots in the butter and olive oil combination and salt & pepper for about 3-5 minutes, or until they are done.   Add the chopped herbs towards the end of the cooking process and mix everything together thoroughly.

With a slotted spoon, remove the mushrooms from the pan, draining it as best as you can,  then place them in a separate bowl or container until you are ready to use them.  I saved my oil and butter combination and used that for some other things later.  Once the mushrooms have cooled, mix in the egg and the egg yolk.

On a smooth surface, CAREFULLY unfold the phyllo sheets.  Lay one sheet down, then brush with either the remains of the mushrooms or melted butter.  Then carefully place another layer of phyllo dough on top and brush with more butter again. 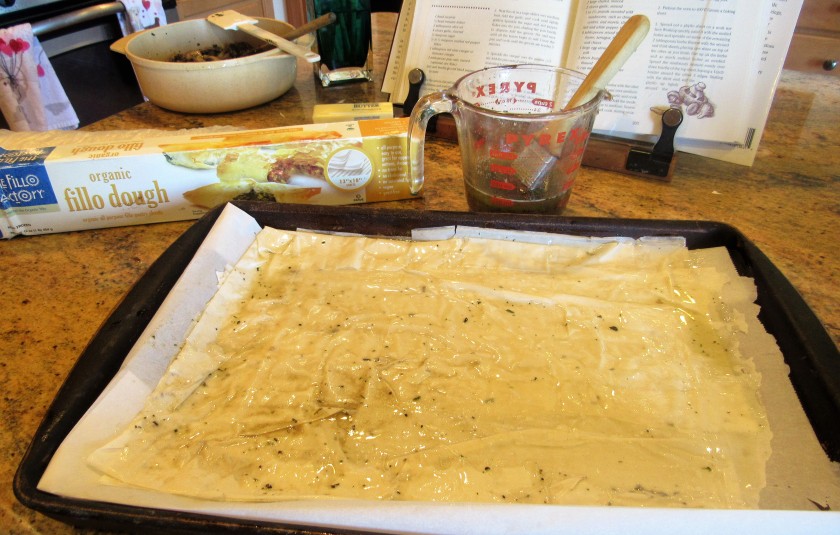 Evenly spread the mushrooms over the phyllo dough, then sprinkle with the cheese.

Carefully add another layer of phyllo dough on top of the mushrooms and repeat as necessary.  Then carefully start to roll from the smaller side.  Once the dough is rolled into a log, again, brush with either the melted butter or the butter and oil combination leftover from cooking the mushrooms.  I chose to use my remains because it was full of flavor from the mushrooms and the herbs, and since it was just cooked in butter and olive oil, I did not see the need to melt more butter.

This is where I started to have A LOT of problems.  I drained my mushrooms, but they must have still had a lot of liquid in them, and my dough started to really fall apart.  Also, I think my phyllo dough may have been slightly past its prime, and it was very fragile and delicate, even more so than normal.  But I carefully rolled my log as best as I could and patched up the places that had holes with some of the bits and pieces that broke off.

Bake for about 20-30 minutes (my recipe called for 15-20, so just watch it carefully).  Once it has browned, remove your strudel from the oven and let it cool for about 5 or so minutes before slicing it an an angle with a very sharp serrated bread slicer. 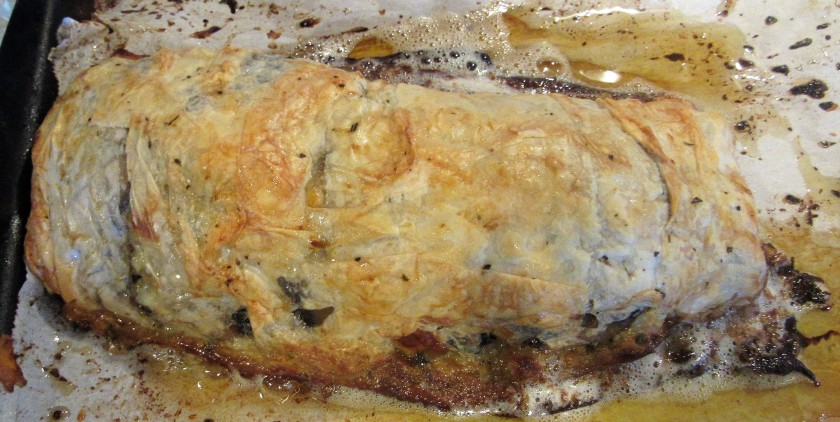 This can be served alone as an appetizer or as a side dish and part of the meal.  I served mine as a side dish, alongside some rib-eye steak topped with chipotle garlic butter, pan fried potatoes (I used the remainder of my oil and butter for my potatoes) and green beans almondine, and of course wine.  The wine was a grenache/shiraz blend that we made a while ago.  Bottling the Wine

This is how a proper strudel should look.  Mine was close (yeah, right), but as you can see, I still have some work to do to get it to be perfect. Working with phyllo dough is a challenge for me, and I LOVE a challenge.  I love phyllo dough, but it is very delicate, which can make it very difficult to work with as well.  You want the strudel to be flaky and crispy, with a nice golden brown color all around.  It should just melt in your mouth.  Mine definitely melted in our mouths, and it shared all the other qualities, it just didn’t look as pretty as this one does.  Oh well, I still have some work to do.  Maybe next time.  🙂