We all have heard of and most likely eaten many stir-fried meals.  We also all know, a stir-fry dish is an Asian way of cooking that was created in China, many centuries ago, and then traveled to other parts of Asia, and eventually to many other parts of the world.  Stir-frying is a method of cooking foods with a small amount of very hot oil, traditionally cooked in a wok.  You can use just about any kind of meat and/or vegetables in a stir-fry.  Stir-fry is just the name used to describe the cooking method, not necessarily the ingredients used.  The term “stir-fry”, however was never used to describe this method of cooking until 1945, when the Chinese cookbook author Buwei Yang Chao coined the term in his cookbook, How to Cook and Eat in Chinese.    There are many reasons why this is a preferred method of cooking. It preserves the nutrition and the freshness of the foods and ingredients used; it needs very little oil; it saves time; and the foods have a very nice presentation.

A wok is a type of cooking pan that is rounded at the bottom and has high sides which allows the food to be seared at a very hot temperature while it is cooking, without using a lot of cooking oil.   Today, many people, myself included, use a skillet rather than a wok to achieve the same results.  I have a wok, but I actually prefer using my skillet.  Sometimes, using a non-stick skillet instead of a wok is actually better.  It is usually healthier because you use even less oil than you would by using a wok, by about 1/2.  A non-stick skillet can actually cook the food at a higher temperature too.  Most woks can withstand temperatures of about 400* F, whereas, the non-stick skillets can withstand temperatures of over 500* F.  Otherwise, there is not much difference between cooking your stir-fry in a wok vs. a skillet.  It all boils down to your personal preference. 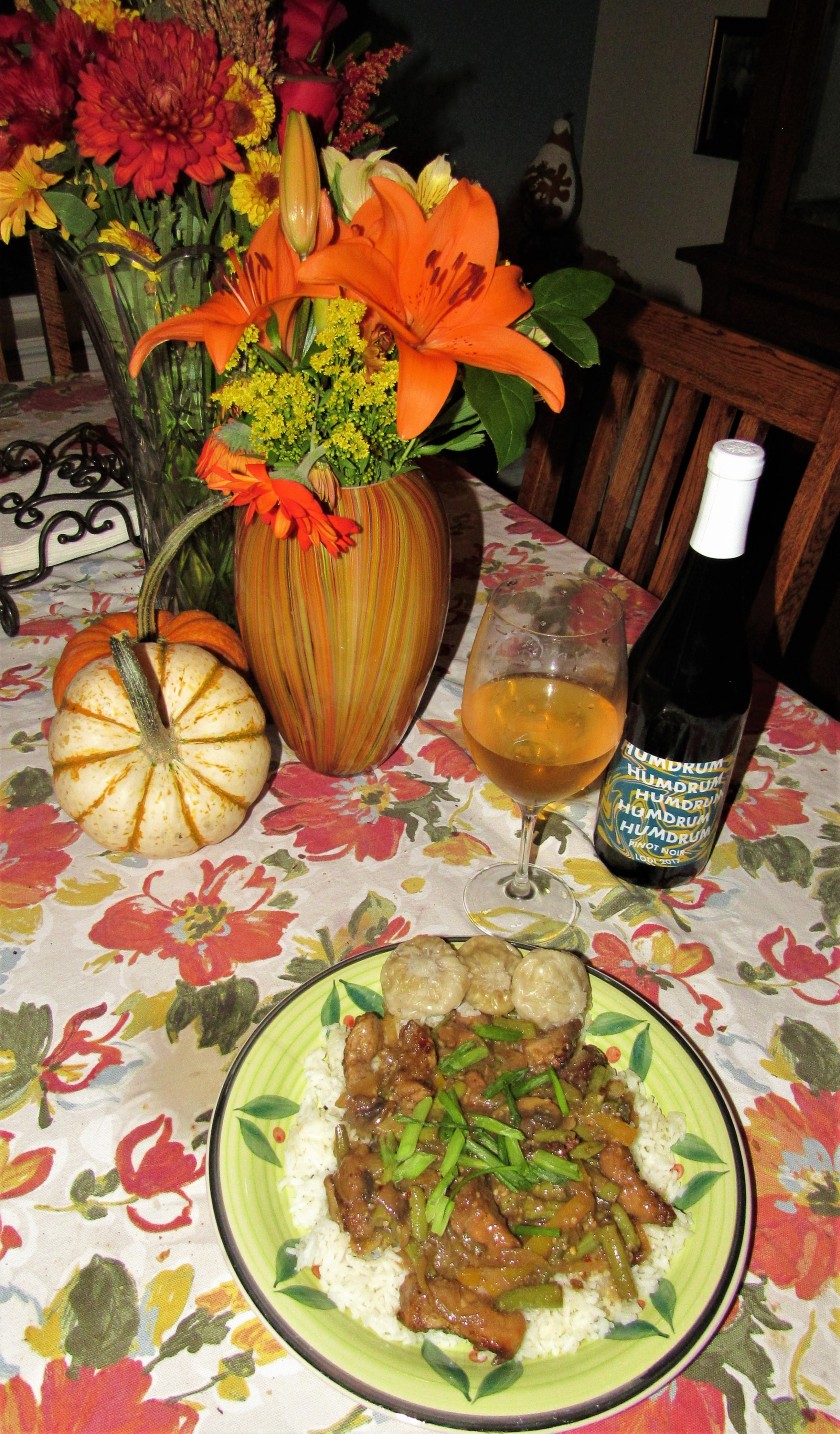 In either a very hot wok or skillet, heat the oil and cook the vegetables, the garlic and the ginger, stirring constantly until they are cooked, but still with a bit of a snap to them.  Remove them from the pan and set aside. 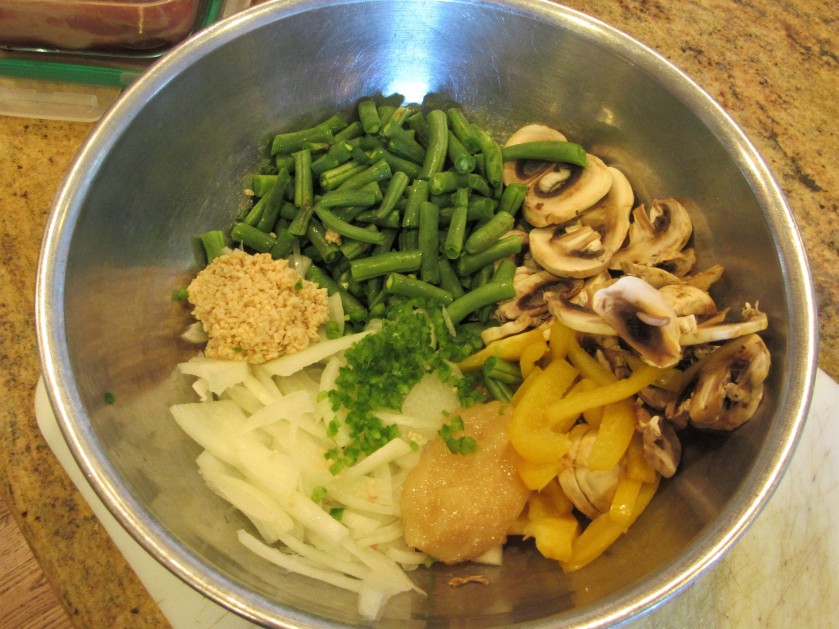 While the vegetables are cooking, coat the pork strips with the cornstarch and seasonings, making sure to completely coat the meat.  Once the vegetables have been removed from the cooking pan, add the pork to the hot oil, and cook until the meat has a light crust and is completely browned. 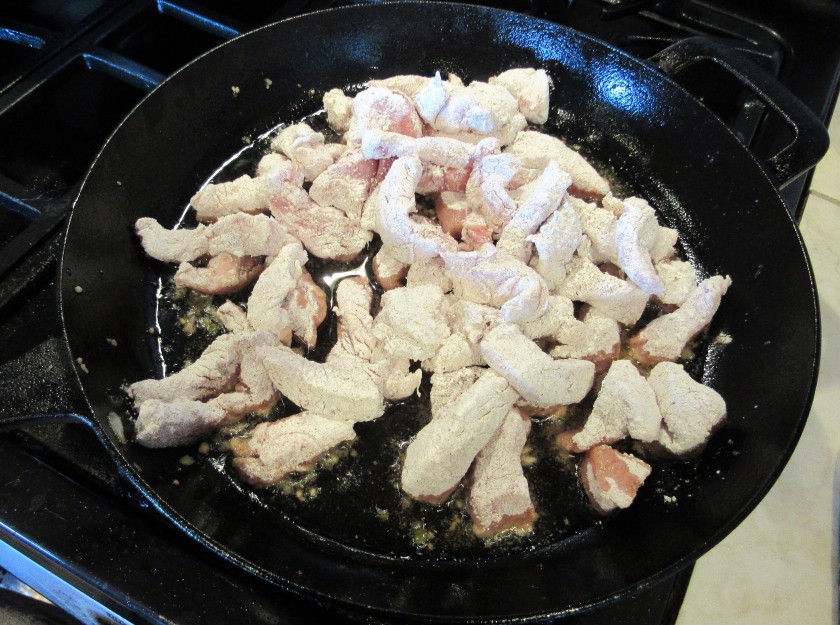 To make the sauce, combine the orange juice, honey, soy sauce and red pepper flakes together.

Put the vegetables back into the hot skillet, and add the sauce.  Once everything is combined well, add the meat back into the mixture.  Bring the mixture to a boil, then reduce to a simmer and continue to cook for about 5-7 minutes. 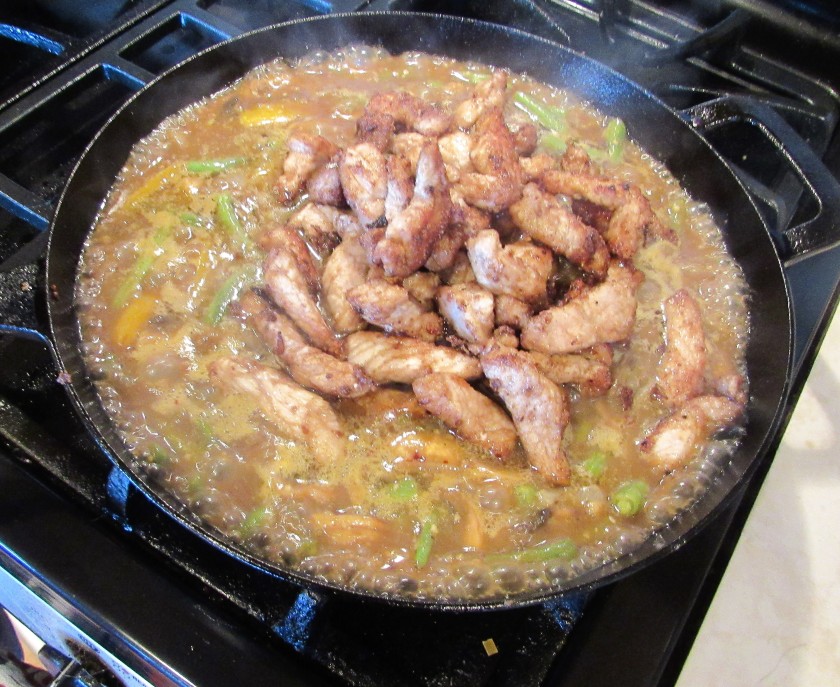 Serve immediately over cooked rice.  Top with green onions, cut in Asian style or at an angle, if you choose.  I served this with some potsickers (store bought, I know) and a dry white wine.  The dry white wine will go very nicely with the spice of the dish, although it is a mild spice.

20 thoughts on “Stir-Fry Pork and Vegetables”