Babka is a type of bread that is swirled and twisted, and is both dense and light at the same time, all in the same bite.  It is famous for it swirls of goodness that run through the bread loaf.  It’s origins are still a bit of a mystery, but it is a very popular type of bread all throughout Eastern Europe and areas with large Jewish populations and communities.  Some say it was originated in Poland or in the Ukraine, and others believe it came from Italy, as a “Russified” version of the Italian panetone bread.  Babka, also known as babcia, translates to mean little grandmother and this term is used in the Russian, Ukrainian, Eastern European and Yiddish languages.  Some say it is called “little grandmothers” because the pans it was first baked in were pleated and reminiscent of the pleats in an old woman’s skirt.  Others say it is called this because the older women or “little grandmothers” were the ones who most often made it.  Babka first came about in the early 1800’s when Jewish housewives would use the leftover scraps of challah and mixed it with either jam, cinnamon, almond paste or seeds and nuts and twisted them into the bread before baking it.   When the Jewish immigrants came to New York in the early 20th century, they started making it with chocolate as well.  By making it with chocolate, it supports the Italian theory of origin, because in the late 15th century, a lot of the Italian chocolatiers were Jewish.  Today, babka can be either sweet or savory, and is a delicious swirled and twisted bread to be enjoyed at anytime, as a compliment to the meal or served and eaten all on its own.

I made a Mediterreanean babka to go along with my black-eyed pea and ham soup for New Year’s Day. New Year’s Good Luck with Black-Eyed Peas and Ham Soup  This is definitely a bread I will be making again and again.  It is very time consuming to make, and is truly a labor of love, but definitely worth every minute and all the effort put into it.  Maybe it is called the “little grandmothers” because of all the love that goes into making it. 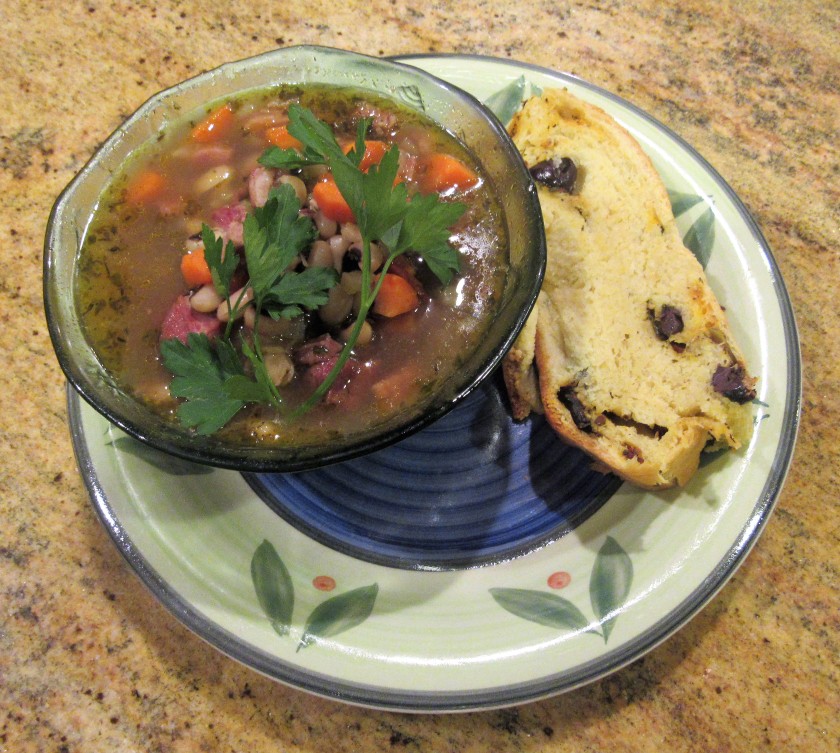 3/4 cup of mixed olives, chopped rough and Spanish peppers (if you can find them) 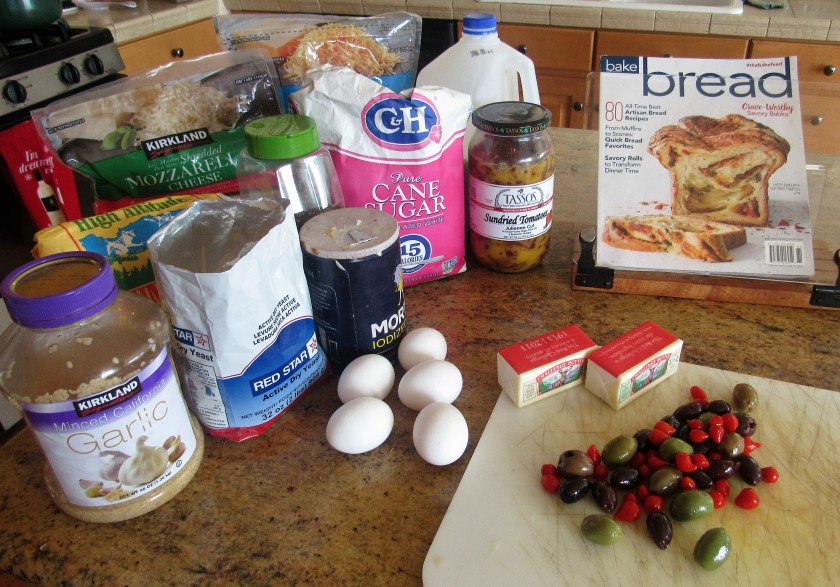 Mix together the flour, sugar, yeast and salt and combine well.  Then add the eggs, and egg yolks and mix everything together in a mixer with the paddle attachment at a low speed.  Slowly add the warmed milk and continue to mix until the dough comes together.  Then increase the speed of the mixer to high and continue to mix for about 6-8 minutes or until the dough becomes thin and starts to pull away from the center and stretches out.  This is known as the “window pane” test. 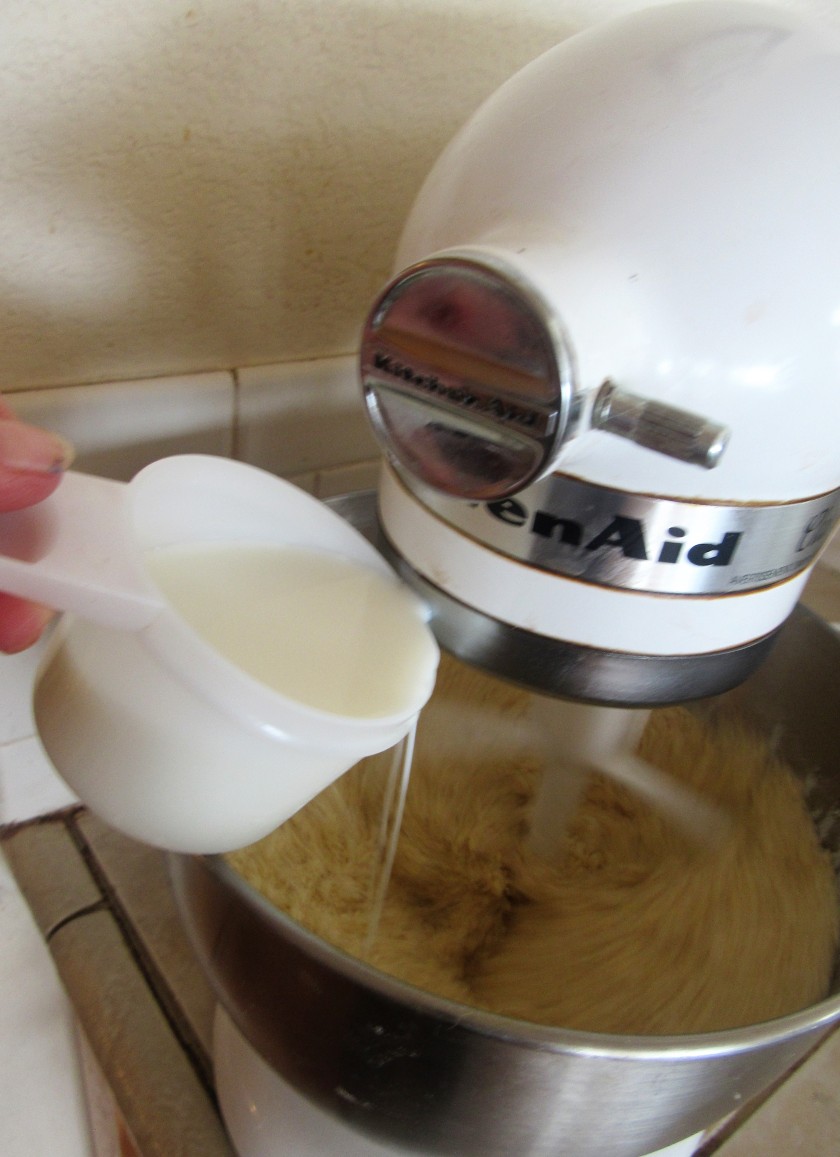 Once the dough is at the window pane stage, switch to the dough hook and add the butter in 3 separate stages, making sure to blend it thoroughly at each stage.  Mix the dough until it becomes elastic and starts to form into a ball and pulls away from the sides of the mixer. 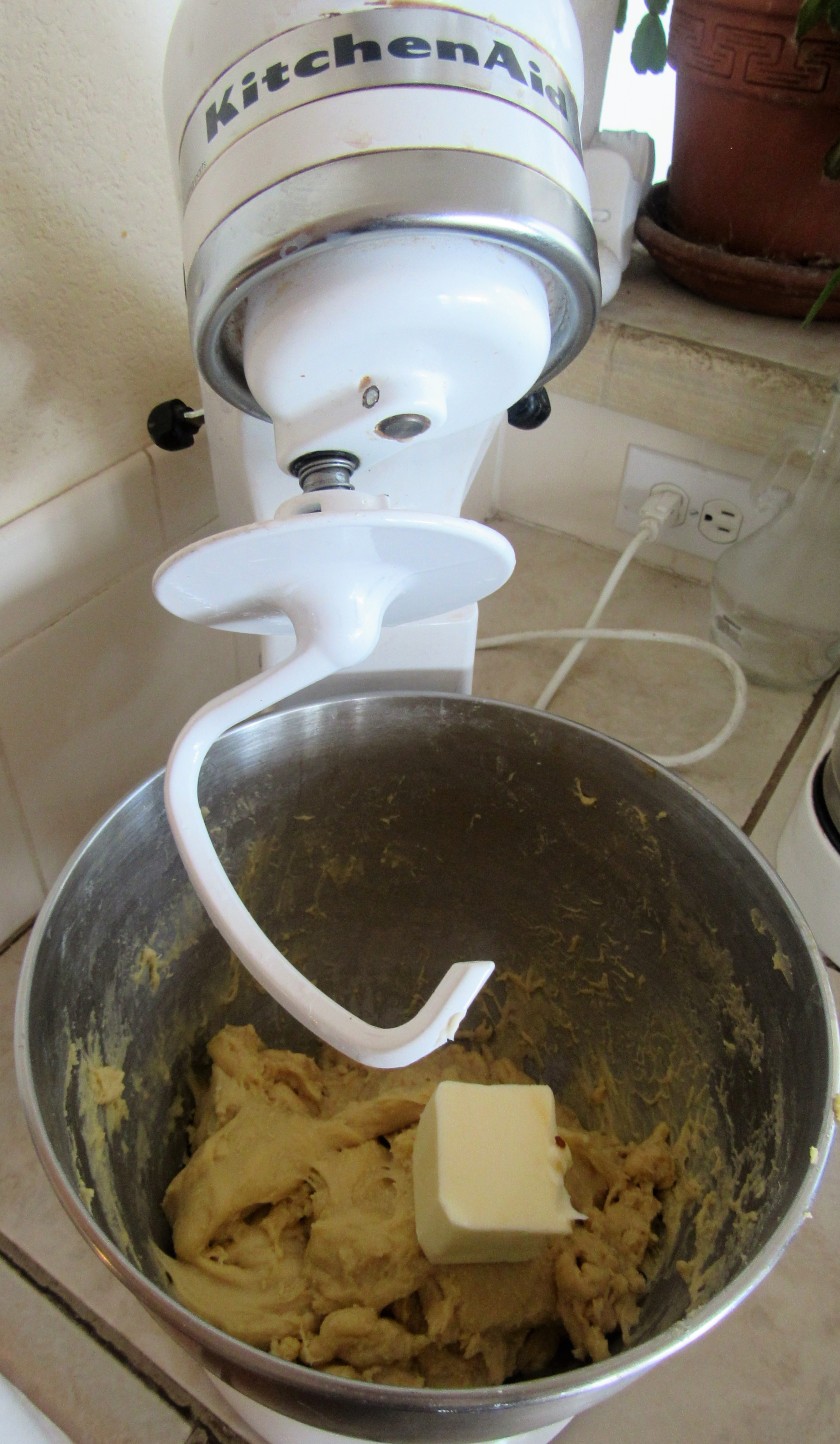 When the dough has formed into a ball, place it in a large bowl that has been oiled down with olive oil.  Cover it and and set it in a warm place to let it rise.  It needs to double in size, so let it rise for about 1 1/2-2 hours. 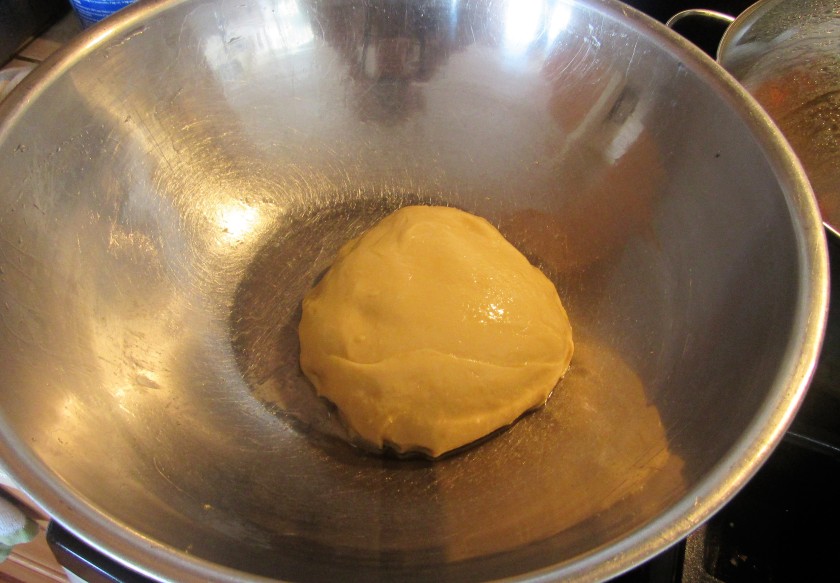 When the dough has risen and doubled in size, wrap it in plastic and let it chill in the refrigerator for at least 30 minutes.  You can also leave it overnight as well.  The dough is a very soft, very sticky dough.  After it has chilled, roll it out onto a heavily floured surface to about 16×12″ in size.  Make the egg wash with the egg white and 1 TBSP of water, and brush the edges of the dough.  Add your cheese and olive mixture.  Then fold over the edges and wrap to make the dough into a rectangle. 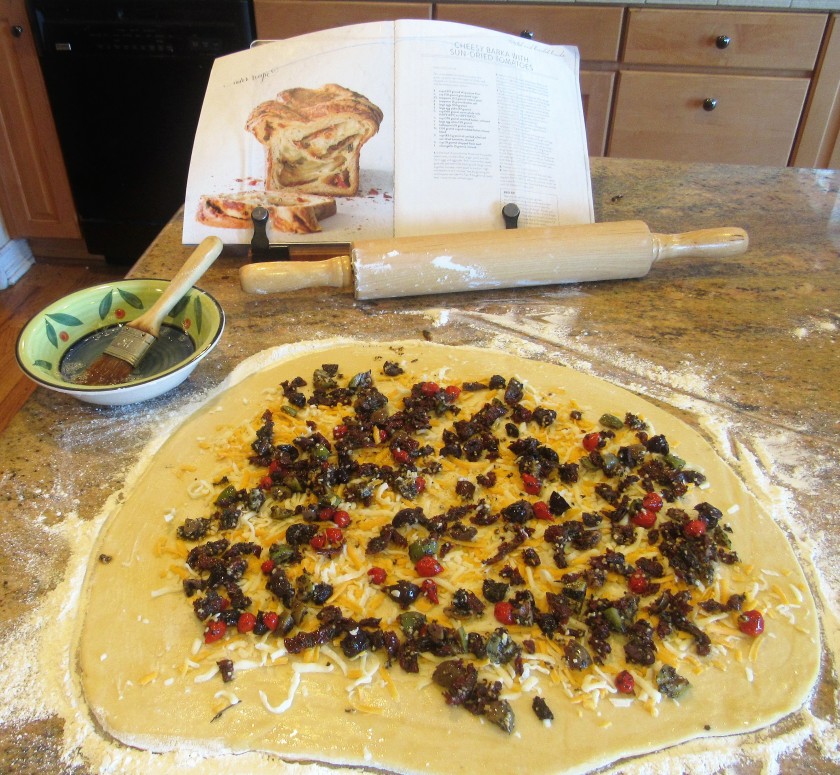 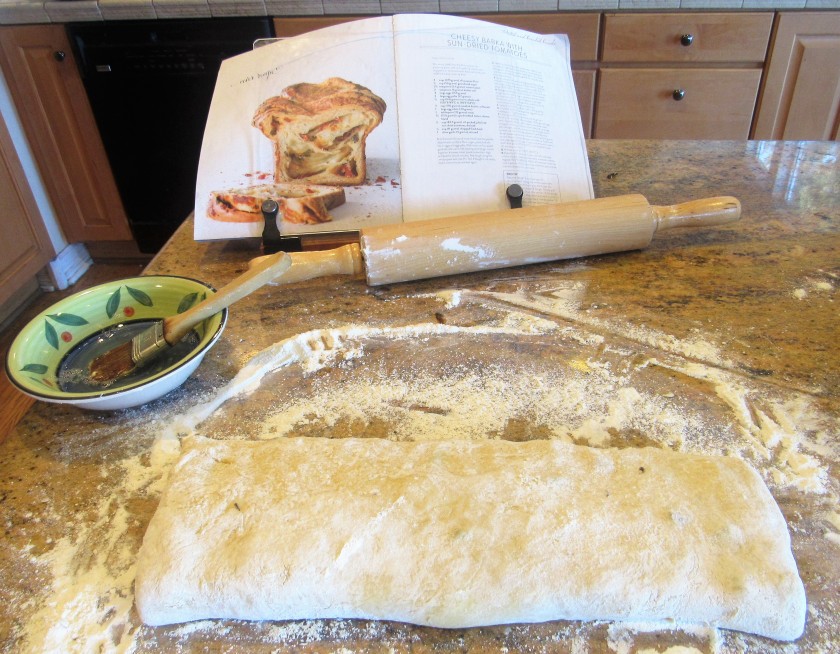 Gently twist the dough and fold it to make it fit into a loaf pan that has been sprayed with cooking oil. 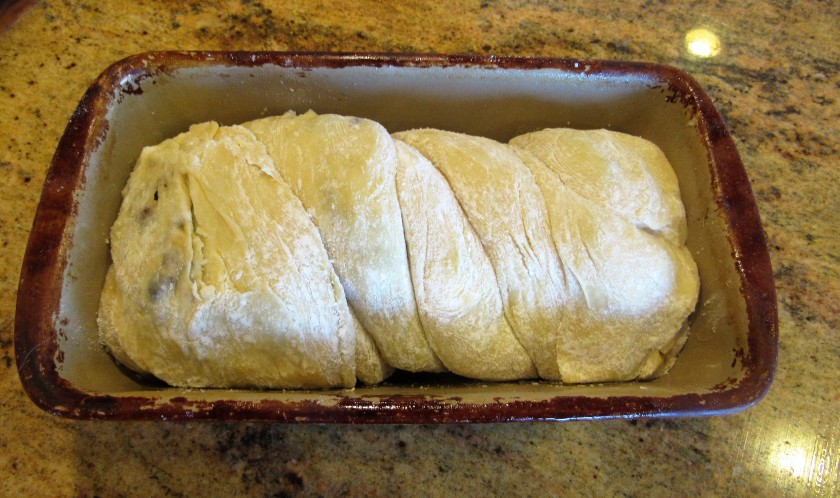 Once again, cover it and let it rise in a warm spot for about an hour, or until it again doubles in size.  Once is has risen for the second rise, preheat the oven to 350* F or 180* C and brush the top with the egg wash.  Bake for 20-30 minutes uncovered, then cover it with aluminum foil and continue to bake for about another 45-50 minutes.  Let it cool completely before cutting.  Let there be bread. 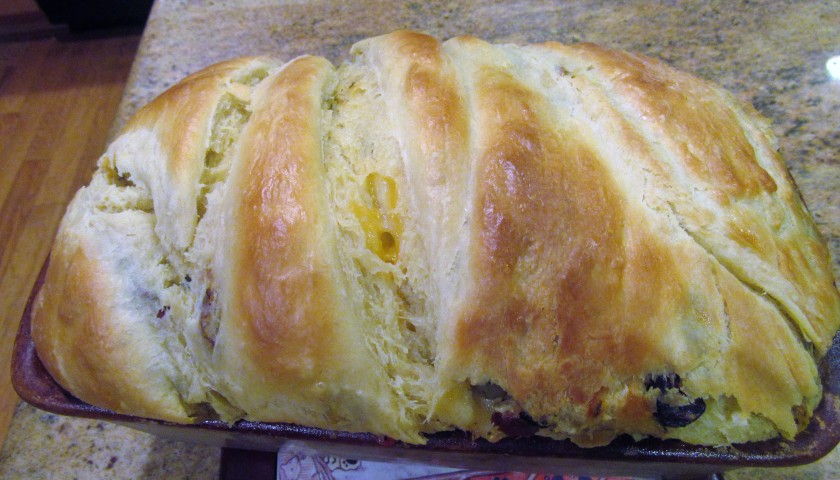 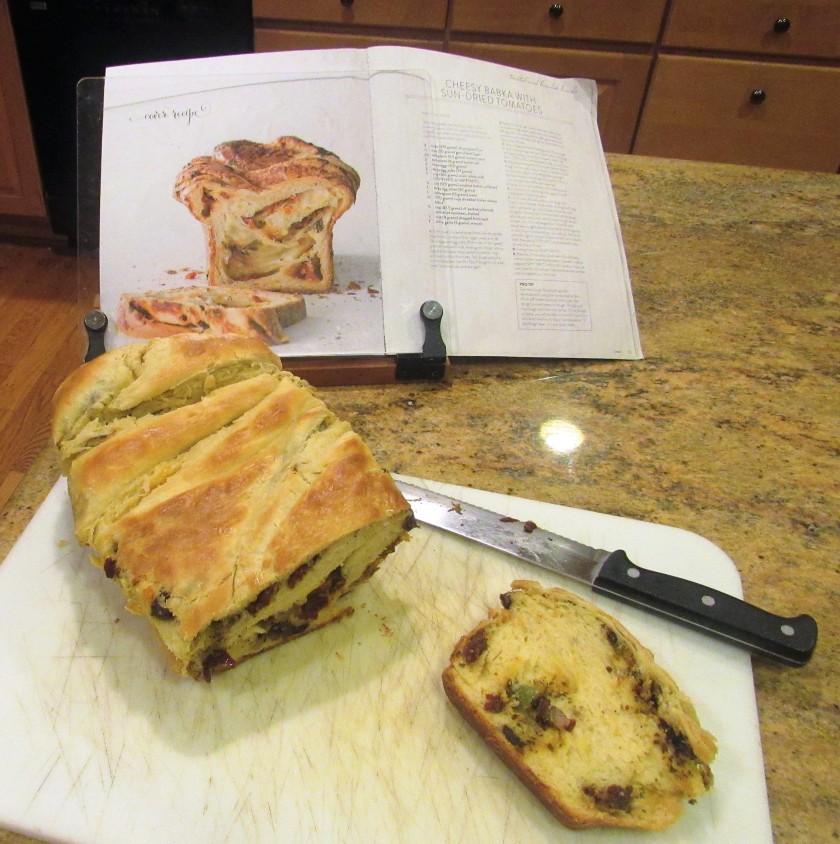 9 thoughts on “Babka with a Mediterranean Twist”