The other night we got together for dinner with friend and fellow blogger, Julia from http://retirementrvdream.wordpress.com/.  Julia and I only live about 30 minutes away from each other.  We met and  became friends when Julia hosted her fun and festive Mardi Gras party, on fat Tuesday, at the end of February.  Two Bloggers Meet  We hit it off really well, and it felt like we had known each for years.  We have been meaning to get together ever since, but as you all know, the world and life was put on hold due to COVID.  But now the world is beginning to open up, it is time to start living life again, and part of that means getting together with friends.

Julia chose a restaurant that is about 1/2 way between both of our houses.  We went to the Yak & Yeti in Arvada.

There are four Yak & Yeti restaurants in the Denver Metro area.  This is the Arvada location.  It has been around since 2008.

Mr. Dol Bhattarai, the owner of Yak in Yeti, has been in the restaurant industry for almost 13 years. Always interested in fine food, he began his culinary career in India. He honed his cooking abilities apprenticing in of the world-class restaurants located in the metropolitan city of Delhi. Not long after, Mr. Bhattarai worked as main Chef in an internationally recognized Indian Restaurant in Dubai.

Coming to the USA and settling in Boulder Colorado, Mr. Bhattarai worked at the Taj Restaurant in Boulder for about five years before launching his own family-flavored restaurant, Yak and Yeti.

Mr. Dol Bhattarai is originally from Syangja village, located in eastern Nepal. This is an area of scenic mountains, fresh air, and natural produce. Generations of Indian and Nepalese influence have made the food Mr. Bhattarai offers tantalizing and tasty for all palates.

The Yak & Yeti specializes in foods from Northern India and Nepal, where “food is an art form that has been passed on from generation to generation, from guru (teacher) to vidhyarthi (pupil).  The cuisine is as rich and diverse as Nepalese & Indian civilization, encompassing a vast scope of traditions and regional variations in taste, color, texture, appearance, and delicacy. The hospitality of Nepalese & Indian people is also legendary. In Sanskrit literature there are three words that form the motto of Nepalese & Indian hospitality: “Atithi Devo Bhava,” meaning “your guest is your god.” Food is the crown of festivals and celebrations, and whatever the occasion, Nepalese & Indians eat with great gusto.”

We all ordered something different, and everything was delicious.

As soon as we ordered our meal, we were served a plate of Indian flat bread with four different sauces.

Then our meals were delivered.  We feasted on Lamb Biryani, Honey Chicken Curry, Lamb Vindaloo, and Tandoori Salmon, along with Basmatic rice, and alu naan and garlic naan bread.  Everything was so good.  Northern Indian food is not nearly as spicy as Southern Indian food, but you can still choose your level of spiciness.

It seemed like we all ate quite a bit of food, yet by the time we had finished eating, it looked like there was still a lot of food leftover.  Of course we brought it home.  It was too good not to take it home with us.

Julia and Bruce in between courses.

Bruce knew he wanted dessert before we even ordered, so he saved room for it.  He was the only one who did though.  The rest of us were too full for dessert.  Bruce was waiting for his kheer, which is an Indian rice pudding. 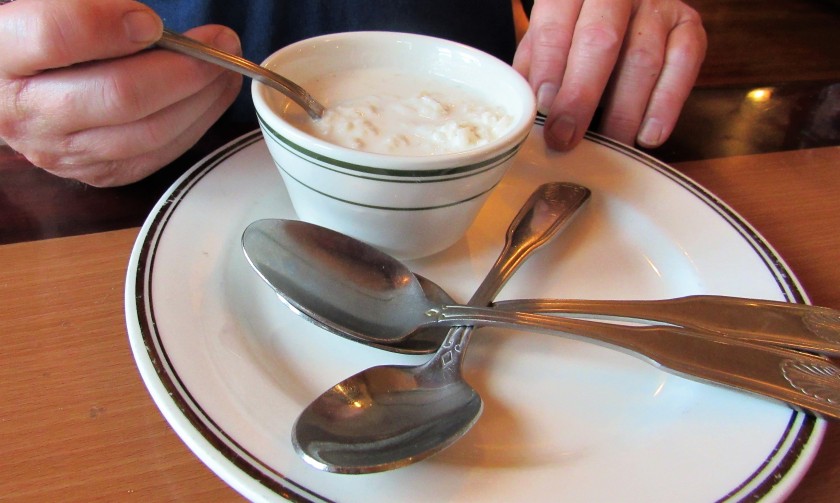 Once again, we had a very good time and a scrumptious meal.  It’s so good getting together with friends and sharing a meal.

Yak and Yeti Brewpub in Arvada is located at 7803 Ralston Road, Arvada, CO 80002.  Call ahead for reservations at (303) 431-9000 or you can contact them by email at yakandyetiarvada@gmail.com or online at http://www.TheYakAndYeti.com.