I was supposed to meet a friend for lunch, but a family emergency came up and she had to cancel.  Unfortunately, I did not get the message until after I came home from the restaurant.   Even though I did not get the chance to catch up with my friend, I was still able to enjoy a very good lunch of sushi and tempura shrimp and vegetables.

Lunch was at a Japanese restaurant called Sushi Yume, in Westminster, CO, literally just about 1 1/2-2 miles from my house.

The food was very good, even though I ordered way to much and ended up bringing half of it home.  But I was able to try a couple of different menu items this way.  The restaurant is decorated in a very traditional Japanese style and there were two sushi chefs on hand to prepare all the delicious sushi choices fresh, using the best top grade seafood. 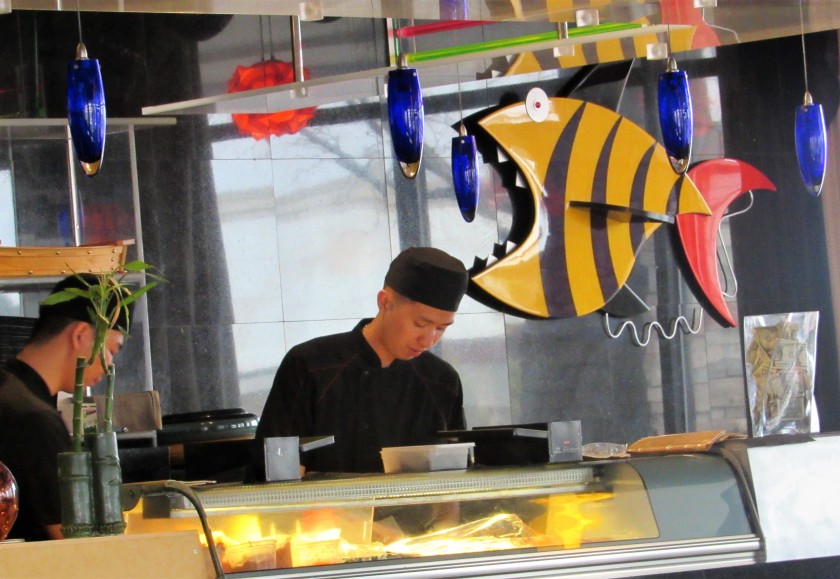 They make it look so easy, but I know it is not nearly as easy as they make it look.  Making sushi is an art form that requires a lot of patience and skill.  I have made it before, a long, long time ago.  Needless to say, I will not be a sushi chef anytime soon.

If you have never had sushi before, you order want you would like from the sushi menu and then it is freshly prepared for you while you wait.  There is also a menu that offers other items coming from the kitchen rather than the sushi bar.  The little pot is filled with soy sauce.

As I waited for my order, I was busy taking pictures of the restaurant.  The restaurant is very Japanese in style.   All of the tables have temperature controlled heaters on them so you can heat your food to your liking. 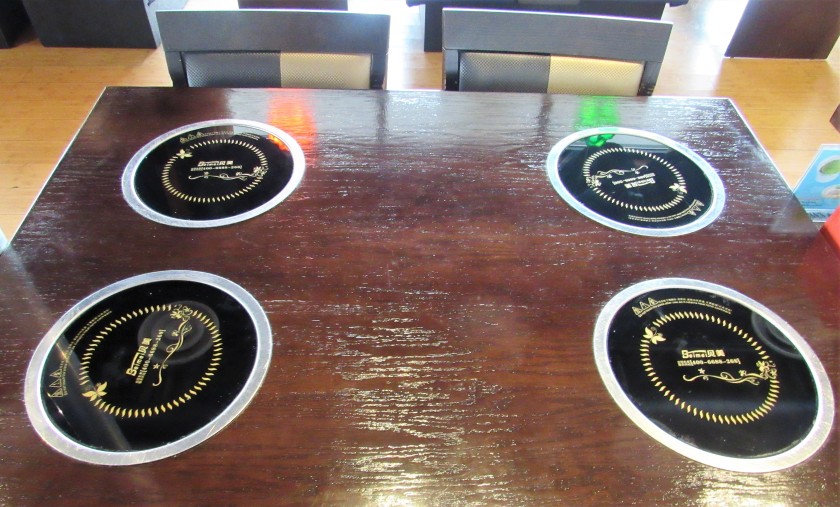 Once my delicious food came, it was time to eat and to put the camera down.  I ordered a tiger roll, which was spicy crab meat and avocado rolled in sticky rice, topped with a sweet mango sauce, served with fresh ginger and wasabi sauce on the side. It was both beautifully presented and very tasty to eat.  (I just finished my leftovers for lunch again today.  They were just as good the second time around as they were the first). 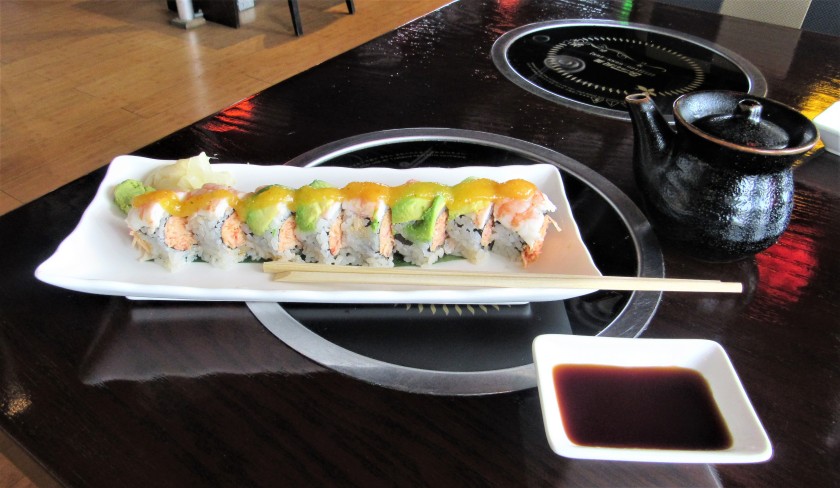 Sushi has kind of become a general category for Japanese style cuisine that is usually raw fish served in a roll or a log.  Sometimes it comes with seaweed and other times it does not.  There are actually a few different types of sushi though.  Sashimi is thinly sliced raw meat—usually fish, such as salmon or tuna—that is served without rice. Sushi is not raw fish, but rather vinegared rice that is mixed with other ingredients, which may or may not include raw fish.  Sushi can also be vegetarian, but sashimi is always made with either raw fish or raw meat.  There is also nigiri, which is is a specific type of sushi consisting of a slice of raw fish over pressed vinegared rice.  Sashimi refers to just slices of very fresh fish or meat served raw, often over a bed of shredded daikon radish.  Nigiri is just raw fish on top of rice — no seaweed. There is also maki, which is made as layers of fish, veggies, and rice wrapped in seaweed.  Sushi is any food dish consisting of vinegared rice, usually served with some other toppings, but not always.

I wanted to try something else as well, to add a little variety, and certainly not because I was still hungry.  So I also ordered some tempura shrimp and vegetables.  I love anything that is cooked tempura style.  Tempura is a Japanese dish usually consisting of seafood or vegetables that have been battered and deep fried. The dish was influenced by fritter-cooking techniques introduced by the Portuguese residing in Nagasaki in the 16th century.

Everything was just as I expected it to be; fresh and delicious.  The service was very welcoming and friendly too and the restaurant was spotlessly clean.