Morocco has been known for its spices and unique spice blends for centuries.  It was a major hub for spice traders, and has been influenced by many cultures from around the world, for many centuries.  Morocco is uniquely situated between Europe, the Middle East and Africa.  All of these various cultures have influenced the Moroccan way of life and its cooking through the ages.  There are even a few South American influences that can be found in the Moroccan cuisines and dishes as well.  Moroccan foods are known for being a combination of both sweet and spicy.  Though there are hundreds, if not thousands, of different spices that can be found in Morocco, the essential spices are 1) cumin; 2) turmeric; 3) ground ginger; 4) cardamom; 5) paprika; 6) hot red peppers; 7) white and black pepper; 8) cinnamon; and 9) saffron.  All of these, with the exception of saffron, are staples in my kitchen as well.  I like saffron a lot, but I just can’t seem to pull the trigger to purchase it too often because of how expensive it is.

Though lamb is universal, I tend to think of it as more of a Greek, Middle Eastern, or African dish (and of course Australian and New Zealand as well), so when I made my lamb sliders I naturally focused on something Middle Eastern as a side dish.  Lamb Sliders  When I came across an interesting and exotic recipe for the Moroccan pumpkin and lentil stew, I thought it would match perfectly with my lamb sliders.  I was right.  They went together very well.  My rendition did not come out exactly like the recipe’s rendition, but then again, what else is new?!  I loved the flavors, and even though I followed the recipe pretty much to a tee, it still came out different.  (See what happens when I follow recipes exactly?)  All these means is that I still have some tweaking to do for next time.  I think my dish turned out a little different because instead of using dry, uncooked lentils, I used my leftover lentils and rice that were already cooked.  Gambas a la Zurrukatunia 🙂 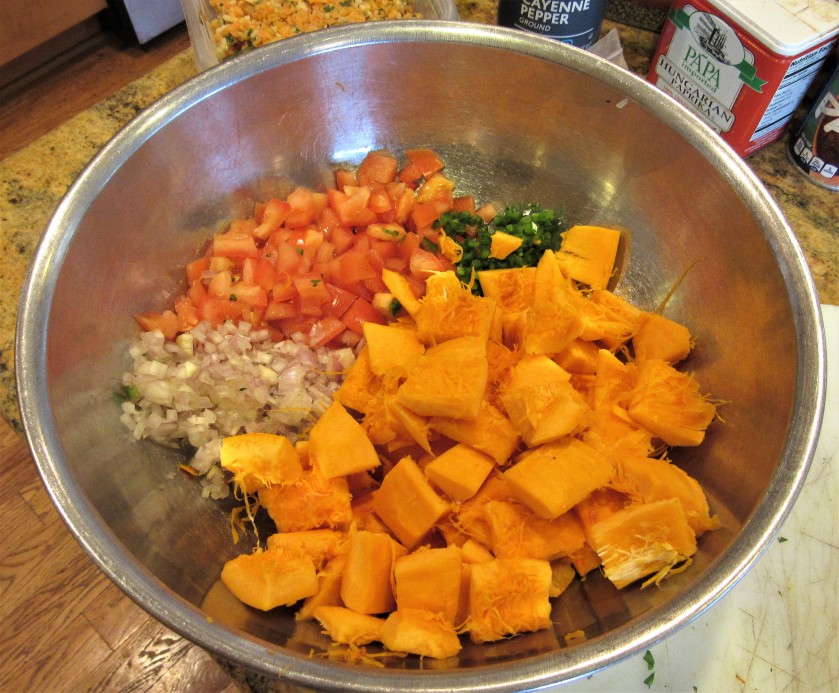 Saute the shallot, garlic and jalapeno in the olive oil for about 5-7 minutes, or until the shallots are translucent, but not yet caramelized.

When the shallots are cooked, add the pumpkin, lentils, tomatoes, tomato paste, all the spices and 2 1/2-3 cups water.  Reduce the heat to a medium-low heat and continue to cook for another 40 minutes or until the pumpkin and lentils are cooked.  Add more water if necessary.  Stir frequently to make sure nothing sticks.

When everything is cooked, add the cilantro at the very end and combine well.  Also use some of the cilantro as a garnish for the dish.  This recipe is spicy and full of flavor.  If you like to walk on the wild side, and enjoy trying new and exotic recipes, then you will enjoy this one too.