To all the Veterans who served and sacrificed, I wish you all a very heartfelt thank you.    On the 11th day of the 11th month, at the 11th hour, thanks to all the sacrifices you made, we are free.

The poem describes poppies blooming between gravestones. Poppies are considered the battlefield flower, because they are the first to grow back after war pockmarks the landscape.  The war created prime conditions for poppies to flourish in Flanders and north-west France. Continual bombardment disturbed the soil and brought the seeds to the surface.  Its powerful use of the symbol of the poppies blooming from the churned earth led to the tradition, to this day, of the poppy as a symbol of remembrance for those killed in service. By 1917, “In Flanders Fields” was known throughout the English-speaking world.  Flanders Fields, the name of World War I battlefields in the medieval County of Flanders, which spans southern Belgium and north-west France. Flanders Field American Cemetery and Memorial, a World War I cemetery on the southeast edge of the town of Waregem, Belgium.

BY JOHN MCCRAE
In Flanders fields the poppies blow
Between the crosses, row on row,
That mark our place; and in the sky
The larks, still bravely singing, fly
Scarce heard amid the guns below.
We are the Dead. Short days ago
We lived, felt dawn, saw sunset glow,
Loved and were loved, and now we lie,
In Flanders fields.
Take up our quarrel with the foe:
To you from failing hands we throw
The torch; be yours to hold it high.
If ye break faith with us who die
We shall not sleep, though poppies grow
In Flanders fields.
I painted these pictures a while ago and thought they were perfect for today. 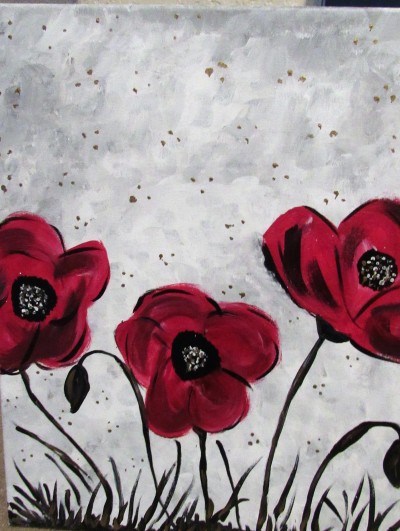 As many of you know, my dad was originally from Melbourne, Australia.  Many of his relatives fought in WWI, and died in the fierce battles of Gallipoli.  The Gallipoli campaign, also known as the Dardanelles campaign, the Battle of Gallipoli or the Battle of Çanakkale (Turkish: Çanakkale Savaşı).  It was a campaign of the First World War that took place on the Gallipoli peninsula (Gelibolu in modern Turkey), from 17 February 1915 to 9 January 1916.  The campaign is often considered to be the beginning of Australian and New Zealand national consciousness; 25 April, the anniversary of the landings, is known as ANZAC Day, the most significant commemoration of military casualties and veterans in the two countries, surpassing Remembrance Day (Armistice Day).  My dad himself ran away at the age of 14, lied about his age and fought in the Australian Army in the battles of North Africa during WWII.  He was an ANZAC.  The ANZACS were members of the Australian and New Zealand Army Corps.  One of his proudest moments, one of the last times he went back home to Australia, was to march in the ANZAC Parade.  When he emigrated to the United States, shortly after WWII, his life was in the Merchant Marines, where he also bravely fought in 2 additional wars.  He did military sea lift command for both Korea and Vietnam.  Thank you Daddy, and to all the other brave men and women who fought and served.  You will NEVER be forgotten.
My daddy, John Bailey Jones, circa 1939, before heading off to North Africa.

4 thoughts on “To the Veterans, a Heartfelt Thank You”