Quiche is one of those dishes like quesadillas, that can be made with just about anything as the filling.  I love quiche but for whatever reason, I do not make it as much as I wish I did.  When I cook a ham, I always seem to make a quiche, but I don’t cook hams that much, since usually they are to large for just the two of us.  When I do cook them, I have a lot of ham left over for many other additional meals.  It doesn’t have to be this way.  Quiche can be made with anything.  I have made many chicken quiches, seafood quiches, vegetable quiches, crab quiches, etc.  I have no idea why lately I seem to get stuck in a rut sometimes, and only make ham quiches.  The most important ingredients in any quiche are eggs and cream.  Anything else is a bonus.  Quiche Is Only Partly French

A lot of times, I prepare the dinner, and leave Larry coking instructions to finish it off.  Sometimes he follows them, other times, not so much.  He did follow my instructions for the quiche, but he left it in the oven a little to long, so it came out a little more brown that what I was hoping for.  But it sure did taste good, and that is always the most important thing when cooking.  I made this quiche with ham, asparagus and mushrooms, and a lot of eggs.  Ever since I discovered the Mile High quiches from Sol to Soul, in Grand Junction, CO,  I have been making them with a lot of eggs, to make them nice and fluffy, and seemingly, a mile high.  Mile High Crab Quiche

Pulse the flour, butter and salt in the food processor until it is all blended together and is crumbly.  Then add the egg and cream, and continue to mix until the dough forms into a ball.  Wrap the dough ball in plastic wrap and let it set in the refrigerator for at least 30 minutes before rolling it out on a lightly flourd surface.

salt & pepper to taste – white or black pepper is fine

Saute the vegetables in olive oil until they are done, about 5-7 minutes.

Roll out the dough on a lightly floured surface and fit it into the cake pan.  Firmly press the dough into the sides and cut off the remaining dough.  Sprinkle the cheese around the bottom of the dough.  Then add the ham.  Evenly spread the vegetable mixture over the ham.

Mix the eggs, cream, salt & pepper and nutmeg together and evenly pour over the ham and vegetable mixture.  I like black pepper because it is a little more pungent than white pepper, but either is fine.  Most people like to say us white pepper for eggs, but it really boils down to your taste and personal preference.

Once the quiche is made, put it in the oven for about 40-45 minutes, or until the filling is set and does not jiggle.  If the eggs are browning up to much, cover the quiche with foil until it is done.  Once the quiche is done, remove it from the oven and let it cool for about 5-10 minutes before cutting.  Serve it with your favorite side dishes, and dinner is ready.  We made dinner “French” by serving the quiche with French fries, and of course wine.  I served a rich buttery chardonnay since quiche is a light meal made with eggs. 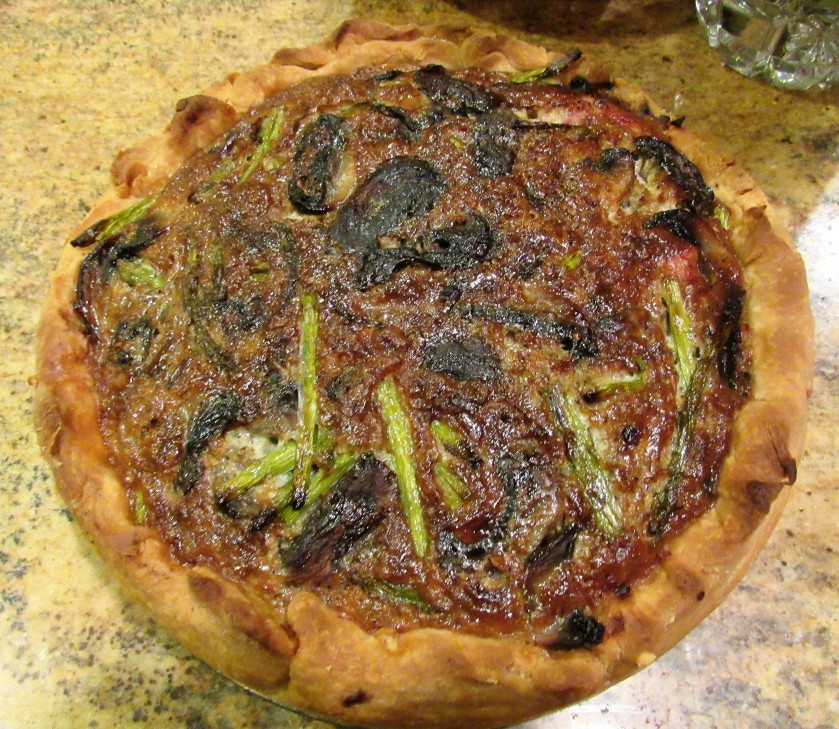 23 thoughts on “A Perfect Day for Quiche”