Galettes and tarts are similar but different.  They both can be either sweet or savory and are a encased in flaky, crusty pastry shell.  A tart can be round, square, rectangular, or even triangular and is most often made in a tart pan that is shallow and straight-sided.  A galette is a free-form, more rustic version of a tart, and most often the edges are folded over the topping and the edges are crimped before baking.  The savory galettes are sometimes called the French version of pizza.  They have similar pastries  in Italy, which are known as crostatas.

The word galette is a French word, deriving from the word galet, which hails from the Breton and Normandy regions of France.  The word originally meant a smooth, flat pebble.  But this term became popular in French cooking when referring to flat, round, free-form crusty cakes.  A galette is a flaky, crusty dish, but there is another type of galette known as A Breton galette, which is similar in concept, but made with buckwheat crepes instead of a flaky, crusty pastry shell.

I love making galettes.  There is just a simple, rustic elegance to them that I just find so appealing.  I have made them both as a savory dish and as a sweet dessert many times.  I had some frozen peaches and blueberries that I needed to use, so I decided to make a peach and blueberry galette.  It was very easy to make, and relatively healthy because I made it with fruit and it is no to sweet.  Although that can easily be changed by making it really delicious by serving it warmed and topped with ice cream.  Then all the healthier aspects of the galette are thrown out the window and we can kiss them god-bye.  🙂

The dough is my normal go-to pastry dough, only I added a little powdered sugar as well, to give it a slightly sweeter taste.

In a food processor, blend the flour, salt, butter and powdered sugar together until it forms a crumbly mixture.  Then add the egg and the cream and process again until the dough forms into a ball.  Wrap the dough ball in plastic wrap and refrigerate for at least 30 minutes before using.

Once the dough is ready, roll it out on a lightly floured surface.  Try to make it as round as possible and roll to about 1/4-1/2 inch in thickness.  Roll it onto a baking sheet lined with parchment paper and start to fill.  If not cooking the peaches first, generously sprinkle the cinnamon sugar mixture all around the galeete, leaving about 1 inch clear all around the edges.  Place the peaches around the galette.  I used my frozen peaches, so they were already soft, but if you are using fresh peaches, cook them in the cinnamon, sugar and butter before placing them around the edges of the galette.   I just layered the bottom of my galette with cinnamon sugar and topped the fruit with butter and more cinnamon sugar. 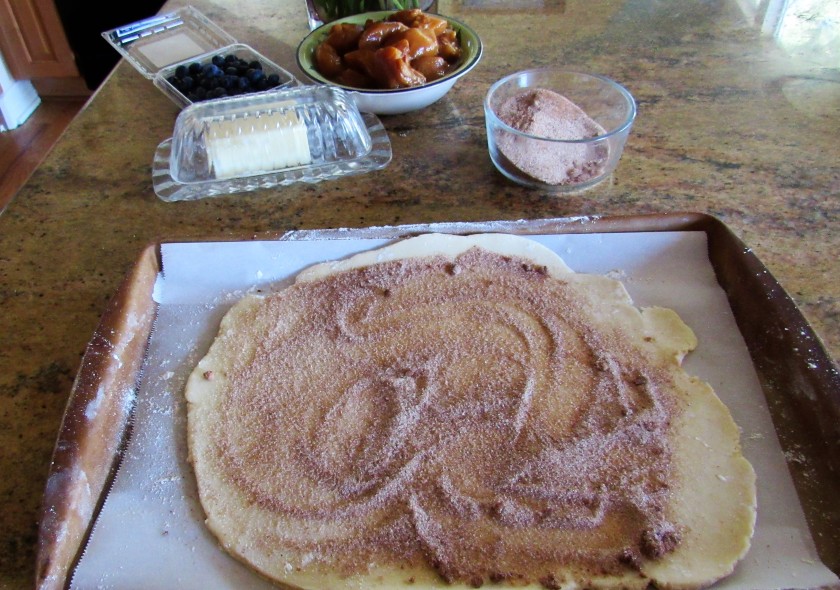 If you are cooking the peaches, add the cinnamon, sugar and butter mixture as well.  Sprinkle the blueberries all around.   Once all the fruit is in place, start folding over the edges around the fruit.  Then crimp them together to make them hold better.  I added my butter on top of the fruit since I did not cook my peaches to make them softer.  Either way is fine and won’t change the end result or the taste. 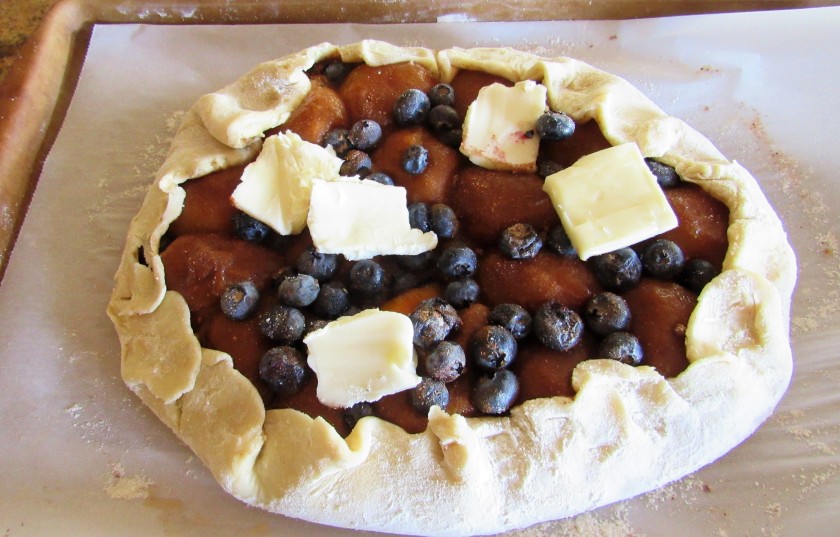 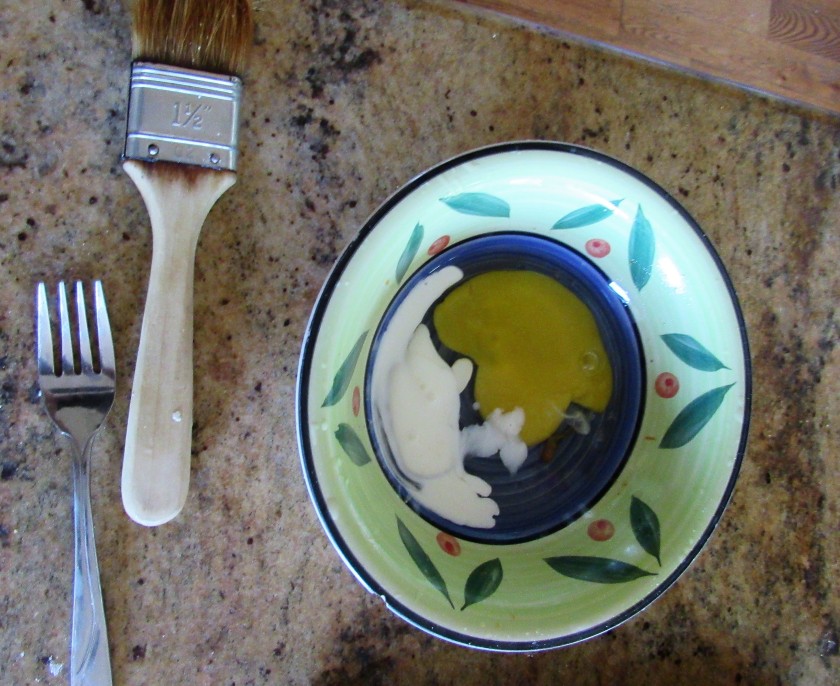 After I brushed the egg wash all around, I sprinkled more of the cinnamon and sugar all over the pastry and on top of the fruit.  It’s now ready to pop into the oven to bake.  Bake for about 30-35 minutes or until the crust is lightly golden in color.  Let it cool before cutting.  If you want to make it more decadent, warm it up a bit and serve with ice cream on top.  YUMMY!

34 thoughts on “Peach and Blueberry Galette”