After we left the Costa del Sol region, we headed northwest in to Sevilla.  Sevilla is in the Northwest portion of Andalusia, located about 340 miles south west of Madrid and about 350 miles or so from the Costa del Sol.  Like the rest of Spain, Sevilla has a very long and rich history, filled with many takeovers, twists and turns, as well as financial upswings and downswings of wealth and ruin, and back to wealth again.  It has been around as a major city and trading port since the early Roman days in the 2nd century BCE, when it was an Iberian town.

Up until the 13th century, Sevilla was known as the Muslim capital of Spain.  This lasted until 1248, when the Spanish Christians took over under the leadership of King Ferdinand II.  At this time, the Moors and the Jews were thrown into exile, and became the minorities of the city.  These were dark days for Sevilla.  The city floundered and was in financial ruin.  Sevilla’s wealth and influence had a resurgence of power and once again became the richest and most populated city of Spain in the 16th. century, when she became known as the center of exploration and exploitation of America, since all the riches coming in from the new world were stored and traded through Sevilla, under the Casa de Contradicion or House of Trade agreement in 1503.  This controlled all the commerce coming between Spain and the New World.  The wealth lasted until the 17th century, until once again, Sevilla lost her way and fell victim to financial ruin.

But Sevilla reinvented herself once more, and became a place famous for the arts and culture.  Sevilla became the home of many famous artists, painters and writers.  Some of these famous cultural creators of the area are:  painters Diego Valezquez, Francisco de Zurburan and Bartolome Esteban Murillo; sculptor Juan Martinez Montanes; poet Fernando de Herrera and probably the most famous of them all, the writer Miguel de Cervantes, who was the author of Don Quixote, which he wrote while serving time in jail in Sevilla.

But Sevilla had been dealt another severe financial blow, and all was lost again, until she had yet another renaissance in 1929, with the Iberoamerican Exposition.

Today, Sevilla is flourishing.  She is known as the cultural center of Spain and has a very prolific trade industry.  She is the most important inland port of Spain, and exports many, many goods and products such as wines, olives, fruit, cork and minerals.  She abounds with industry of all kinds and is the 4th largest city in Spain and is the largest city of the Andalusia region.

Sevilla is also known as being the hottest city of 100,000+ residents in all of continental Europe, averaging about 97* F or 38* C in the summer.  I can definitely attest to the heat, but then all of Spain was very, very hot.

We fell in love with the gorgeous area, driving from the Costa del Sol region up to Sevilla. 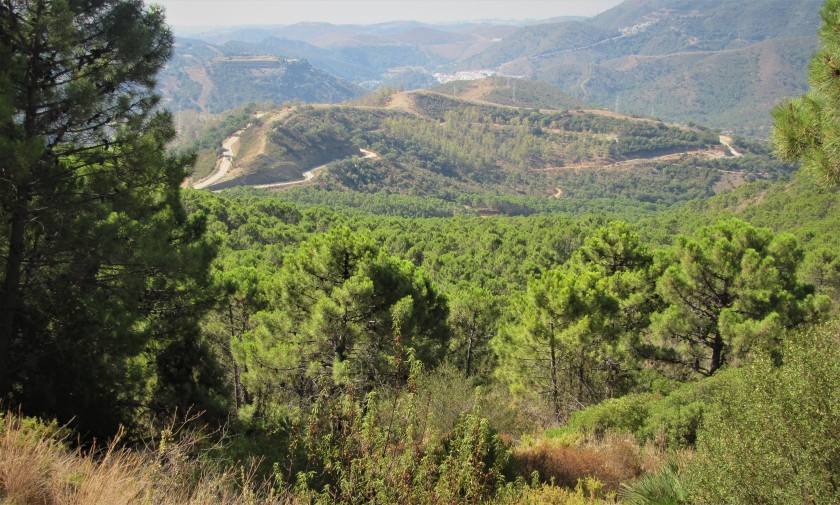 We had about a 350 mile drive from Costa del Sol to Sevilla, so we packed a picnic lunch, and were just waiting for the right spot to eat along the way.  We found an old castle that was just perfect.  How often to you get to have lunch in an old castle, right?! 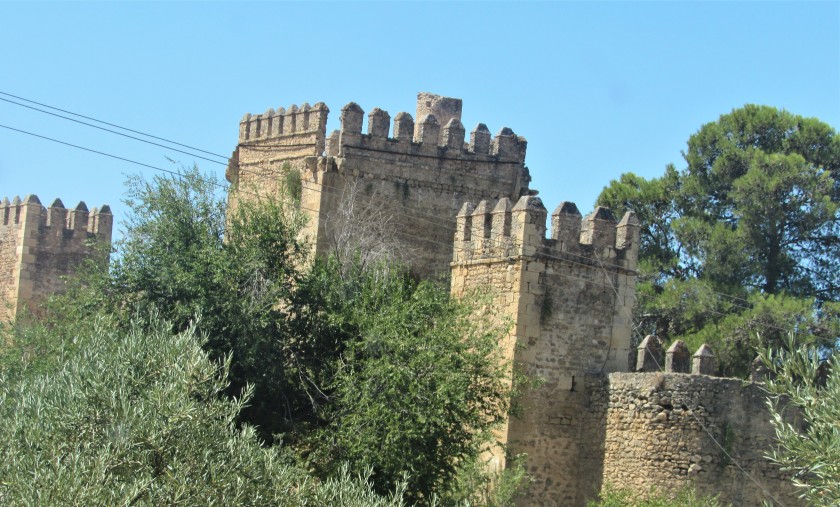 After lunch, we were back on the road again, enjoying all the beauty of the area.  We did not stop again until we hit the city.  This was the view from our hotel’s rooftop.

After we got checked in, it was time to hit the town and check out the city.  Like the rest of Spain, Sevilla is a city of numerous contrasts and a blending of the very old and the very new, with many, many cathedrals, churches, basilicas and mosques seemingly around every corner. 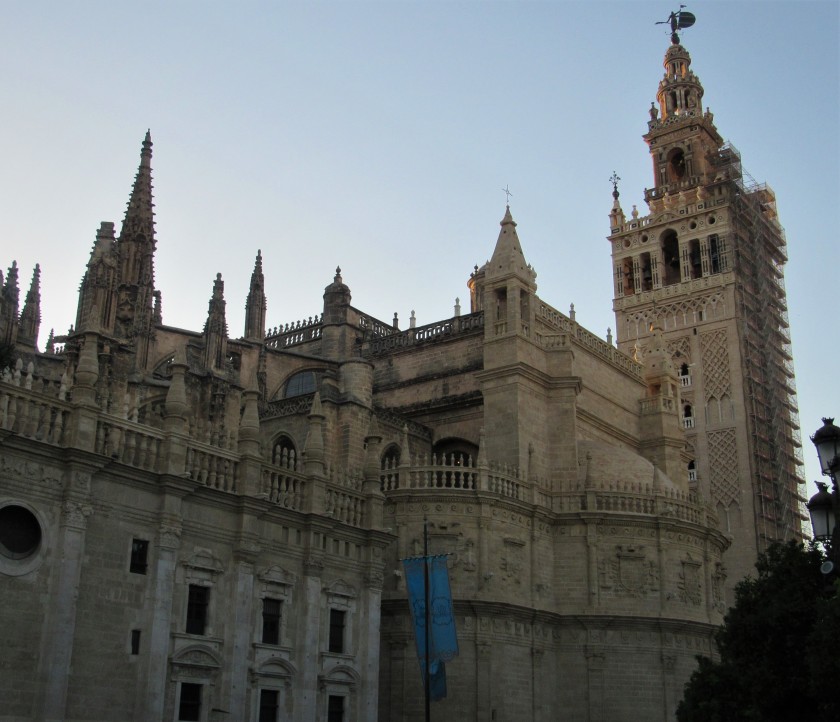 Music, dance and culture.  Sevilla is known as the best place to go for flamenco.  These are the fans that all the senoras use.  I never figured out how to work them, whereas the ladies of Spain just work them gracefully and magically with a flip of the wrist and the fingers. 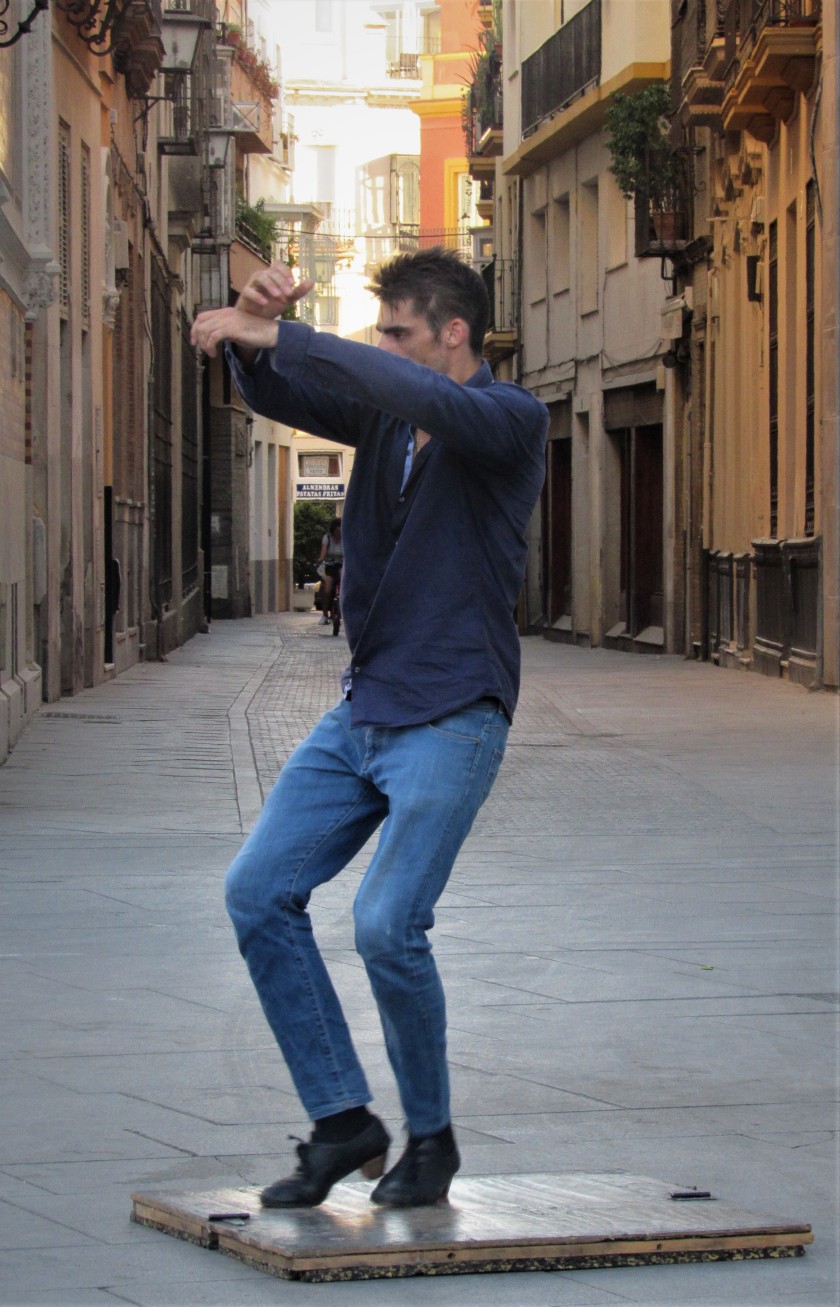 Y los comidas de Sevilla.  Churros y chocolate, which is a favorite treat for the locals.  The churros are dipped in the chocolate. 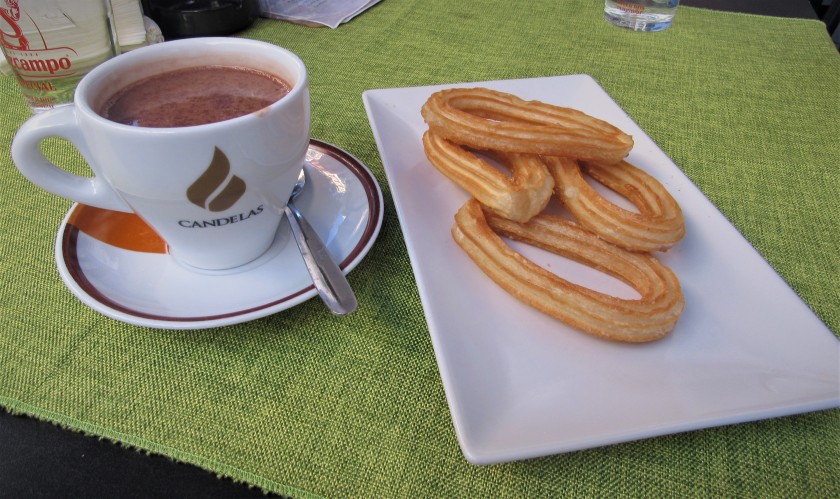 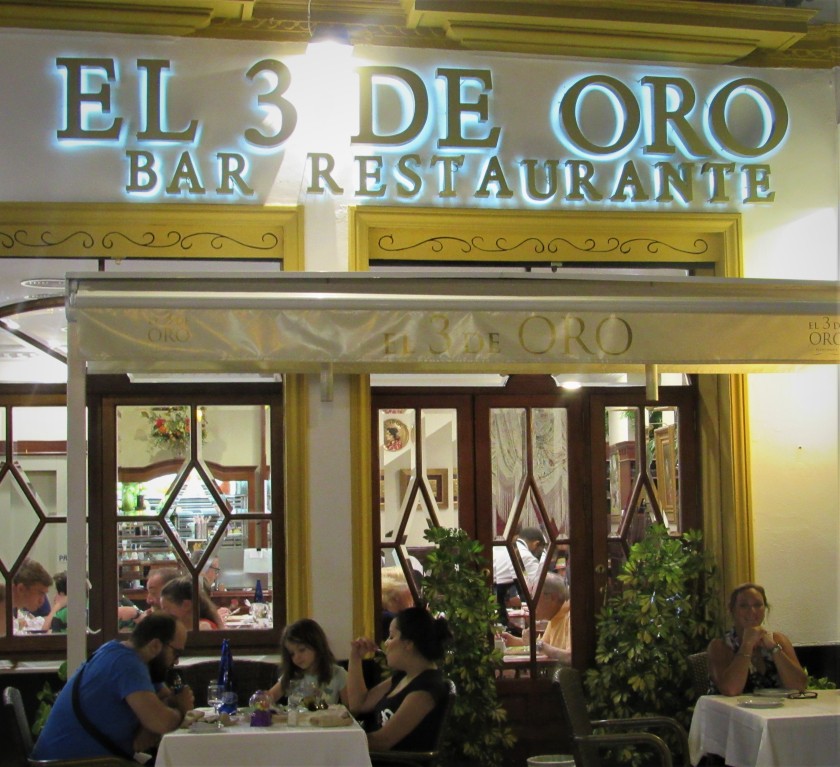 I have really grown an affinity for Albarino wines.  I was first introduced to them last year, in Virginia of all places, and have been a fan ever since,  Wine, Wine Everywhere Wine but the Spanish Albarinos are fantastic.

Olives and capers with a tuna and roasted pepper salad with a balsamic vinegar.  This recipe is one that will most definitely be served here at Casa Jones y Billinger.  Mixed with the bread – Delicioso!

Artichokes sautéed with gambas y jamon or ham and shrimp and a pork and grilled onion dish.

We fell in love with Sevilla, just like we fell in love with the rest of Spain.  Even Ceuta had its own beauty and charm.  We took many great pictures and saw so many beautiful sights, but my favorite picture of Sevilla is of the river.