Cuban food, like many other foods from the Caribbean Islands, has a rich and colorful history with many different cultural influences.  Cuba’s foods and culture has influences from many far off places, and each is as different as could be.  Cuba has cultural ties to the indigenous Ta’ino Indians, Spain, Africa, China and Russia.  Cuba and most of the Caribbean Islands were originally inhabited by the Ta’ino Indians before the Spanish came to the Islands.

As with most indigenous cultures, the people ate the foods that were readily available to them.  The traditional foods of Cuba were seafood, bananas, plantains, root vegetables, rice and a lot of tropical fruits.  Once Havana was established as a major port for Spain, Cuba started to grow, and more and more different cultures were being introduced, which was also influencing and changing the way the Cubans ate.  When the Spanish colonials came to Cuba, they brought a lot of the traditional Spanish foods.  A lot of the Spanish immigrants came from the Southern region of Andalucia, where pork is a dietary staple, so pigs were brought over from Spain.  The Spanish also brought slaves from Africa, and the Africans also brought their own traditional foods, customs and culture as well.  After slavery was outlawed, in the mid 1800’s, numerous people from China were brought over to Cuba as laborers, to do the work that was once done by the slaves.  The Chinese introduced many of their traditional foods and cooking methods.  The Chinese box or the caja china, was one such traditional cooking method that the Chinese introduced to the Cuban people.  It is a slow cooker where the fire and heat is at the top of the box forcing the heat to travel down to slow cook the food.  One recipe this is particularly known for is the lechon asado, or slow cooked pork, which is a must for any Cuban festival.  In 1961, when the Cuban revolution took place, and the United States placed an embargo on Cuba, allowing/forcing Cuba to strengthen its bonds with Russia,  more new foods from Russia were introduced to Cuba.  The Russians brought wheat, pasta, pizza and yogurt to the island.  Not surprising, there are NO American influences on Cuban foods.  However, with many Cubans now living here in the United States, particularly in Florida, there are many Cuban style restaurants and foods making their way into the American diet.  One of these recipes is Cuban shrimp stew.

Cuban food is as colorful as the culture and the people from the Island. 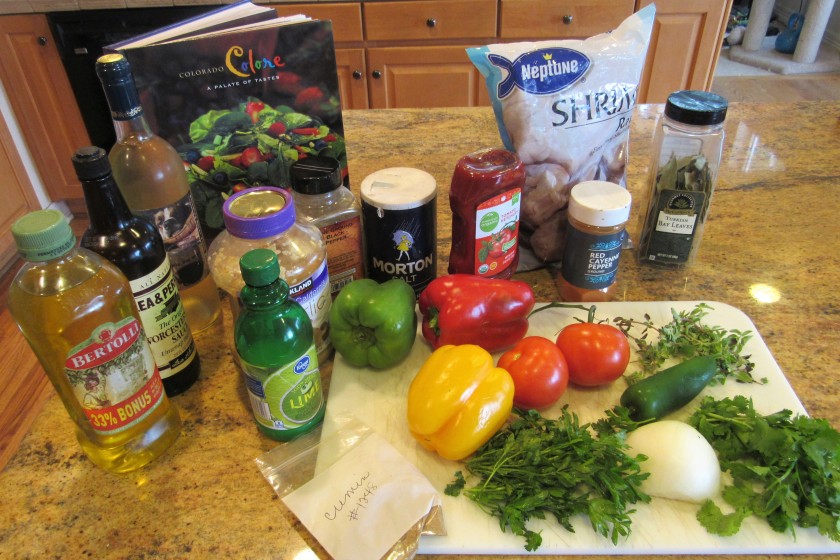 Mix all the ingredients together and add the shrimp.  Let the shrimp marinade for at least 30 minutes before cooking.

While the shrimp is marinading, cut all the vegetables and prepare the stew.

1/2 tsp cayenne pepper or to taste

Saute all the peppers, onion, the bay leaf and garlic in the olive oil until the peppers are soft and the onions are translucent, or for about 5-7 minutes.  Then add the tomato paste or ketchup and the tomatoes and continue to cook for another minute or two. 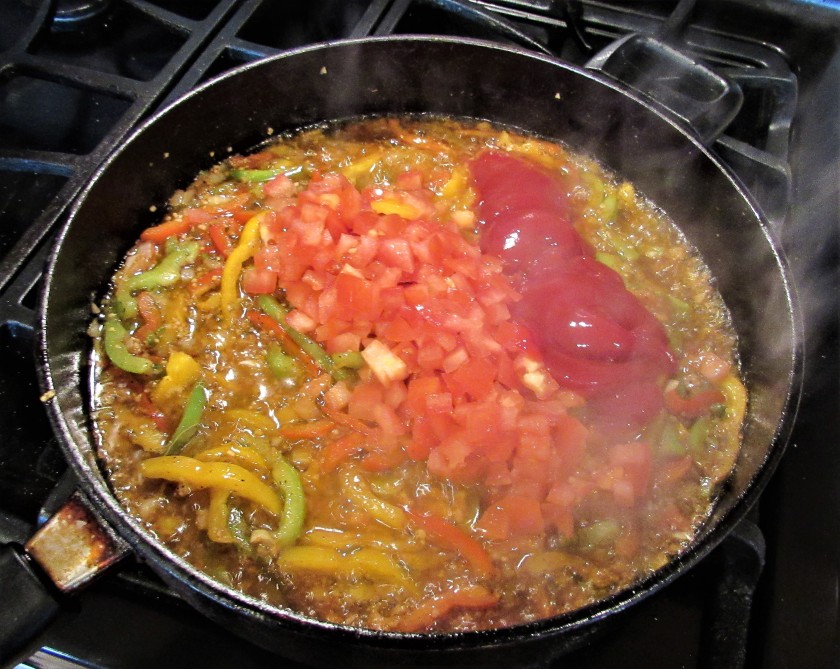 Once the tomatoes and the sauce has been mixed into the peppers and vegetables, add the wine and water to the mixture and simmer for about 5 minutes.

Find the bay leaf and discard it.  Add the shrimp with the marinade into the tomato-vegetable mixture. Add the worcestershire sauce and the seasonings.   Cook for about 6 minutes, then right at the end, add the butter, if using.  I added butter because I found the sauce to be to acidic for me.  the butter helped reduce the acidity of the stew.

Once the shrimp has cooked and the stew is done, serve it over white rice and top with the chopped parsley.  This goes nicely with a mojito or either a sweeter white wine or a lighter red wine.  The sweeter wines will help balance the dish and help reduce the acidity.