When there is a bit of a chill in the air, there is nothing better than something straight out of the oven to help warm you up.  When it is cold outside, I just love pulling something roasted out of the oven and serving it up for dinner, which is stated best by cookbook Author Molly Stevens,  “The word roast carries a lot of significance.  The mere suggestion of serving a roast for dinner conjures images of juicy well-seared meats, caramelized drippings, crispy nubbins of goodness, concentrated flavors and gustatory pleasures” (p. 5 All About Roasting – A New Approach to a Classic Art).  From meats and fish to vegetables, it all comes out great when roasted to perfection.  Dinner last night was one of those deliciously roasted nights.  We enjoyed a roasted pork loin with a fig and prune compote over mashed sweet potatoes, with roasted green beans, mushrooms and pine nuts, and the last of my herbed popovers from Thanksgiving, Herbilicious Popovers served with a warm, full bodied red blend with hints of black cherries and black pepper. 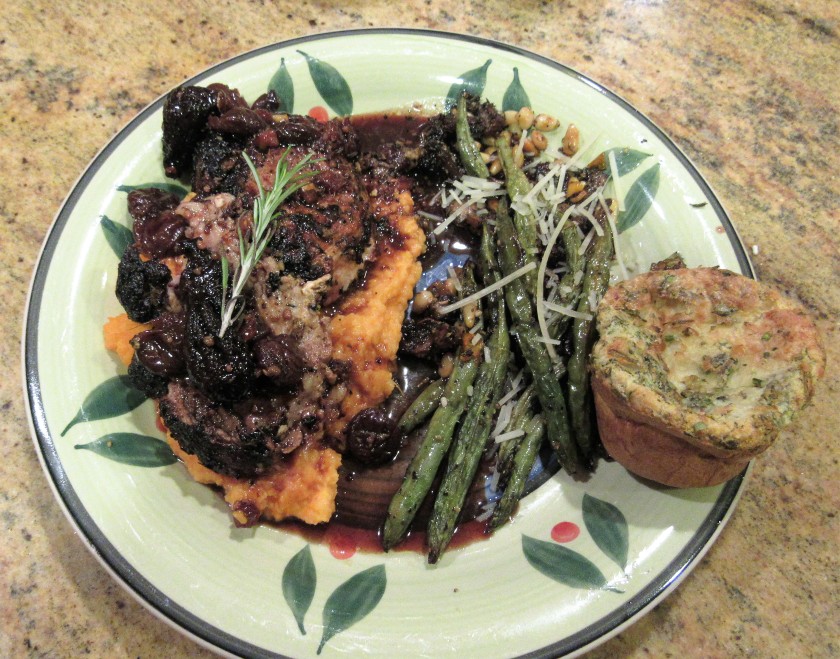 The other day I was looking for something in my pantry when I realized I had some dried figs and some dried prunes when my husband mentioned something about figs that made me think both the prunes and the figs would be delicious with the pork loin. 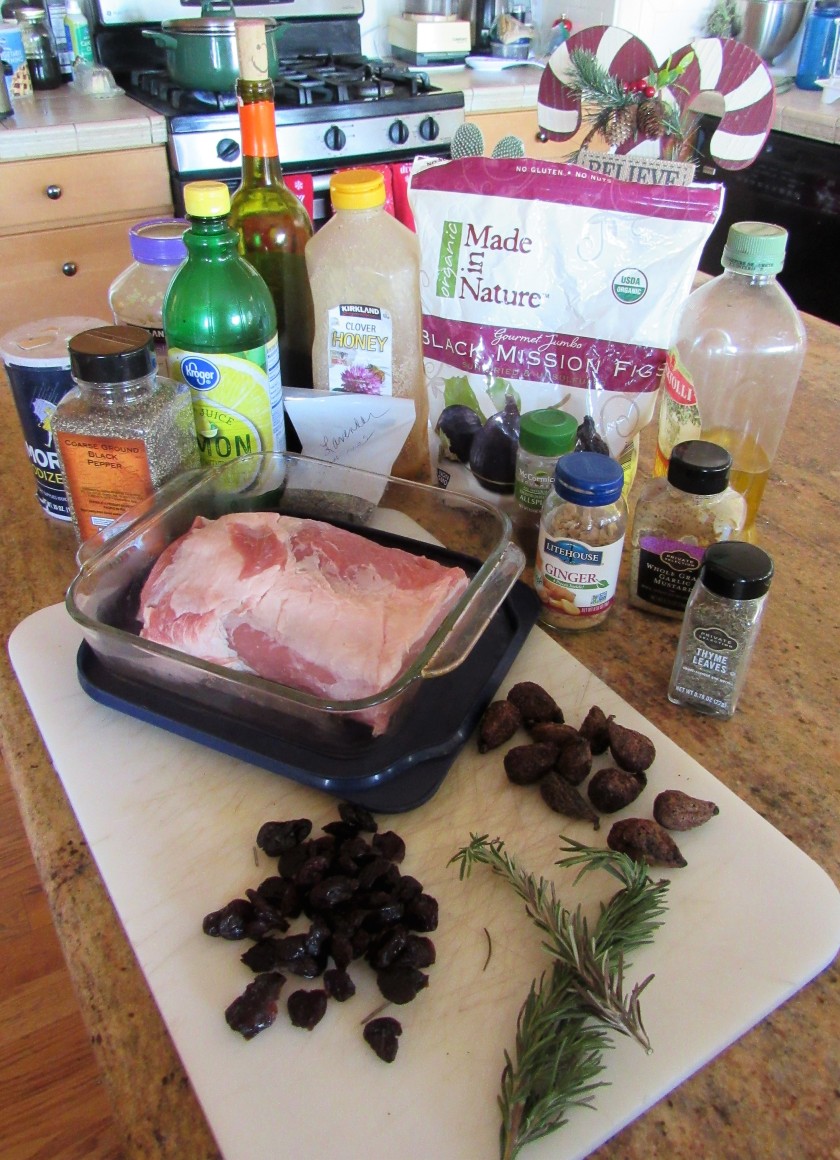 Chop the rosemary and thyme and blend with the garlic, 3 TBSP olive oil, mustard and lavender.  Mix it well then generously coat the pork loin.  Cover and let it set in the refrigerator for at least 6 hours before searing. 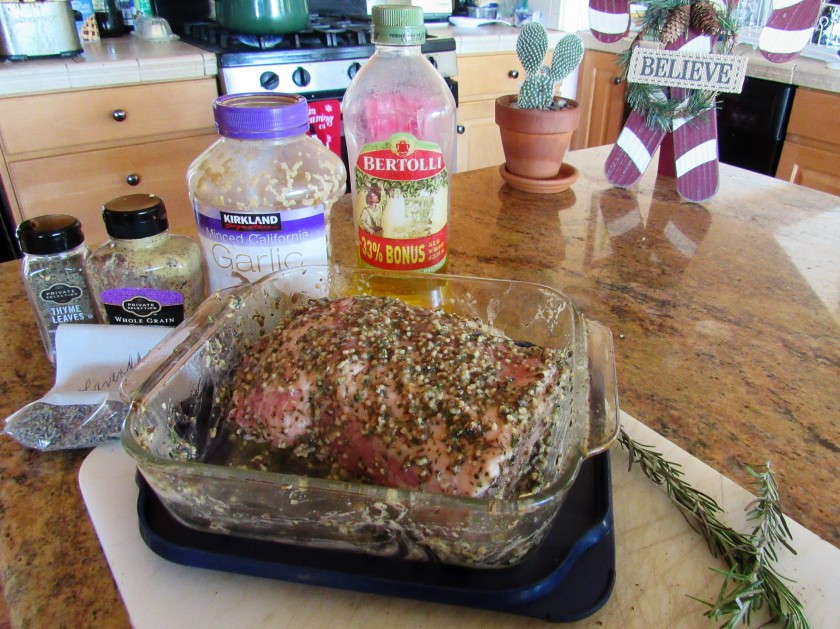 Once the meat has chilled, scrape off the coating and set aside.  Generously coat the pork loin with salt and pepper and olive oil.  In a hot skillet, heat the rest of the olive oil (I also added about 2 TBSP of butter to the olive oil) and sear the meat on all sides, until it is crusty and browned on all sides.  Cook for about 4 minutes per side.

Once the meat has been seared and is crusty on all sides, place it in the oven, uncovered  and roast for about 30-40 minutes, or until the meat thermometer reads 145* F when inserted in the middle of the meat and the juices are clear.

In the meantime, make your fig and prune compote.  In a small sauce pan, mix together the water, honey, lemon juice, spices and pepper, as well as the herb scrapings from the pork marinade.  Bring to a boil then reduce to a simmer, then add the wine, dried figs and prunes, and once again, bring to a boil and reduce to a simmer, cooking for about 20 minutes.  If you like a thicker compote, simmer it for longer. 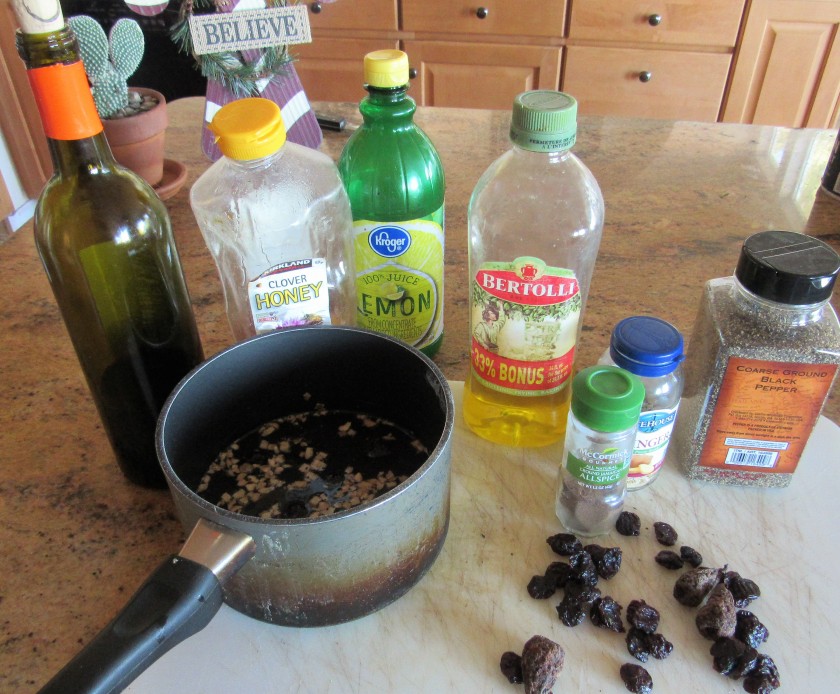 Once the pork loin is completely cooked and is ready to serve, top it with the ginger, fig, prune compote and serve.   I served it atop mashed sweet potatoes.

10 thoughts on “A Roasted Dinner”