Fall is here.  As I look out my window right now, I am seeing all the beautiful colors of the fall season.  The trees and bushes are all various stages of greens, golds, oranges, and reds.  It is just so beautiful and colorful.   The fall season has also brought a dramatic drop in the temperature as well.  These last few days, we have had highs in the high 30’s and low 40’s.  I LOVE it!!!!  I say bring it on!  When the weather starts to get cold outside, there is nothing better than a nice hot soup to warm you up from the inside out.  It is most definitely soup weather, so I made a delicious fall soup with sausage, Northern white beans, pumpkin, and lots of fall vegetables.  As my dad would have said, “it warmed the cockles of my heart”.

Let’s get this soup started.  I used fresh spinach, kobaishi squash (AKA pumpkin), Anaheim chilies, jalapeno, garlic, onions, and tomatoes, along with  spicy Kielbasa sausage and Northern white beans.  To kick it up even a bit more, I added cinnamon and allspice too, and I simmered it all in chicken broth for about 2-3 hours, and Voila!  It was time for soup.

1 lb bag of uncooked Northern white beans (cook according to directions on the package) or 2 cans of beans, drained and rinsed

2 cups pumpkin or hard squash of your choice, medium cube

4 cups fresh spinach, stemmed and chopped in a rough cut

about 8 cups of chicken broth – in the picture I show Swanson’s chicken broth, but I actually made my own and used that instead

Saute the heartier vegetables in olive oil until the onions are translucent and the pumpkin is semi-tender.  Add the sausage and continue to cook until the sausage is cooked completely. 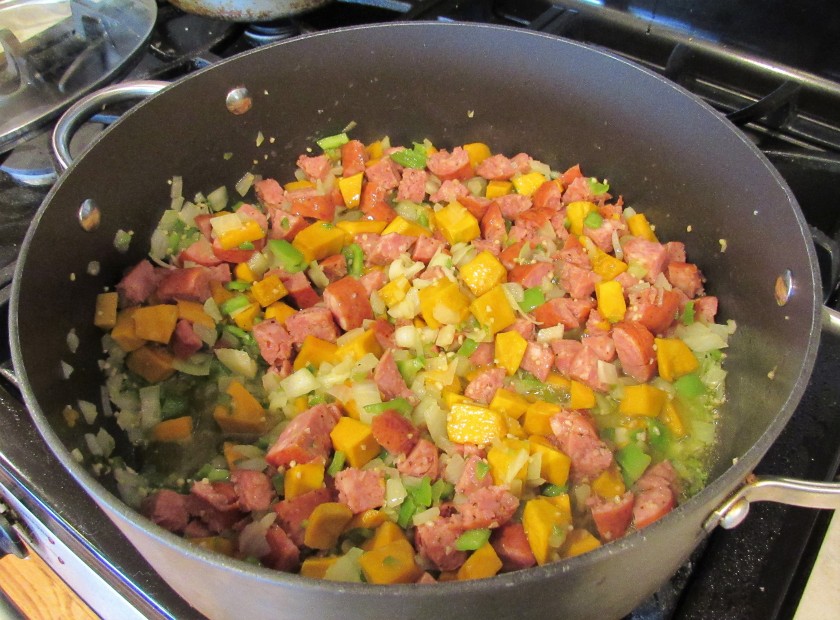 Once the sausage and vegetables were cooked, I added the beans, the chicken broth, cinnamon, allspice and salt & pepper, as well as the additional sausage and peppers I had.  I brought it up to a boil, then reduced the heat to a simmer, and let simmer for 2-3 hours, stirring occasionally. 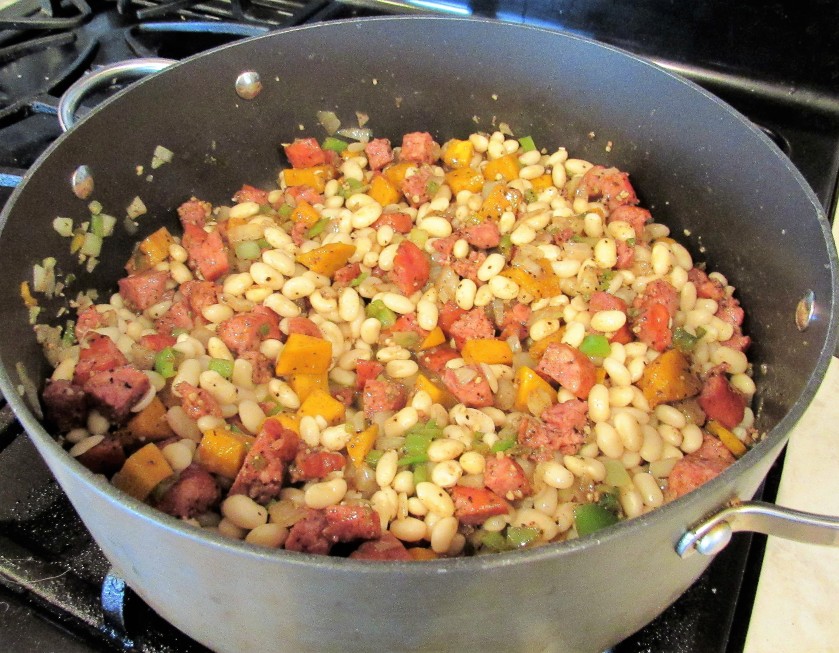 Add the spinach and tomatoes right at the end, and let it cook for just a few minutes more.  Then serve it up.

This is one of my recipes that the more stuff I have, the better it gets.  No real recipe, but, again, as I always say, use what you have and use what you like.  I love all kinds of vegetables, so for me, that’s easy.   I always have a ton of different vegetables on hand.  I just put in a little of this and a little of that, stir my magic wooden spoon, and magic in the kitchen just happens.  I had some leftover sausage with mushrooms, peppers and onions in a spicy marinara sauce, so I added that to my soup as well.  I figured, I was already adding tomatoes and sausage, so why not add a bit more.  It made the soup really hearty.  I just might have to do that again, the next time I make this soup.

Time for soup.  I served it with a couple of slices of warmed rosemary bread and a very smooth, full bodied zinfandel with lots hints of black cherry.  The fruitiness of the wine accompanied the spice of the soup just perfectly.   Bon Appetit!