My husband’s work had a fundraising BBQ yesterday, and I got “volunteered” to make baked beans for the event.  I made them last year too, so I guess they liked them and wanted me to make them again this year.  No problem.  Easy-peasy.  Besides, it was for a good cause.  The charity was to help dogs in need, and that is always going to be something special to me.  I made 6 quarts of beans, and my husband said they all disappeared pretty quickly.  I’ll take this as a sign that everyone liked them.

The beans are still cooking and simmering.  They won’t be ready for quite a few more hours yet. 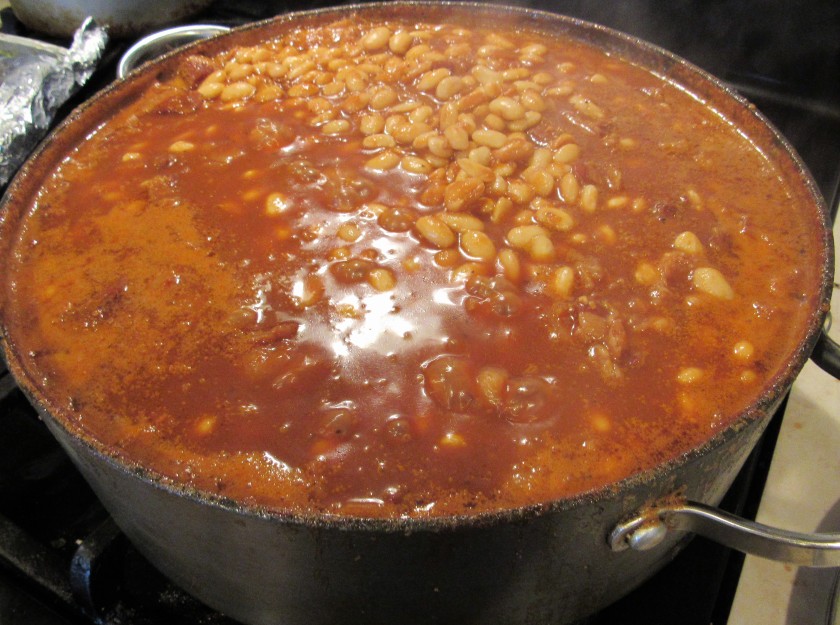 I used great Northern beans, but you can use any kind of beans you like. Because I knew I was cooking for a large crowd, I used 1 whole 4 lb bag of beans.  You can either soak them overnight or you can bring them to a rapid boil and let them boil for about 3-5 minutes, then let them rest in the same hot water for at least about 2-3 hours.  Drain them and add fresh, clean water before starting the real cook.  This is to loosen up the beans and to help release all those gassy agents we all know to be associated with eating beans.  Then cook them according to the package directions and your recipe you are following.  For baked beans, you can use any kind of beans you want, but the smaller beans are best because they will take on the flavors of your sauce more than large beans will.  If you use large beans, just increase the cooking time and make sure you have enough liquid for cooking.  It’s perfectly OK to add more liquid as needed during the cooking process. 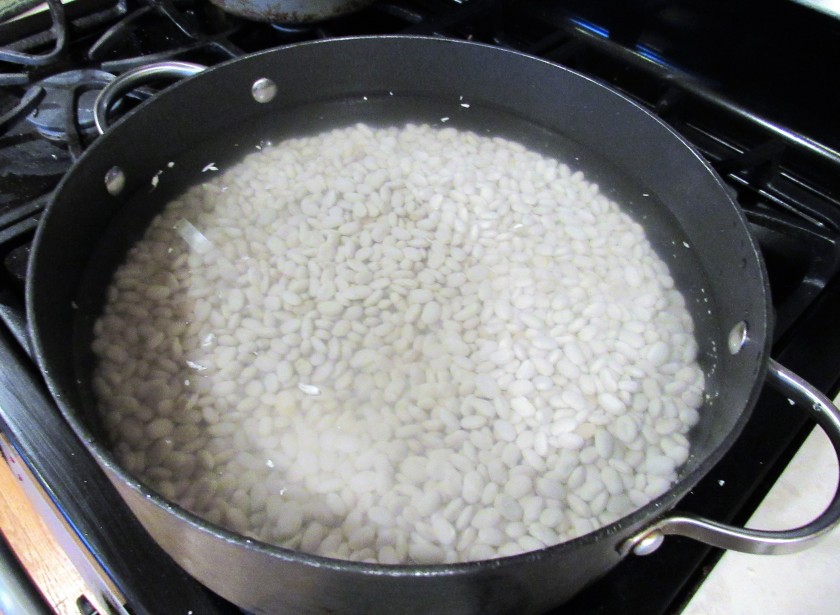 Making the beans.  I also added about 1 cup of bourbon to my mixture as well, since my husband kept telling everyone they were bourbon baked beans.  The bourbon added a little extra kick to the beans and made the sauce a little richer.  Originally, I was going to cook them in my slow cooker, however, there were too many beans and they would not all fit in my slow cooker once I added the water and sauce, so I slow cooked them on the stove in a large Dutch oven or cooking pan with a tight fitting lid.   I transferred them to the slow cooker once they were completely cooked to make it easier for my husband to take them into work and to keep them warm until they were ready to be eaten.

After about 10-11 hours at a low simmer, the beans are finally ready.  Yes, I turned them off at 9:59 PM, as you can see on my clock on my stove, right before going to bed.  Once my husband got into work, he let them cook a bit more in the slow cooker until they were ready to serve at the BBQ.  Total cooking time was maybe about 12 hours.  As you can see, my beans almost tripled in size from their original size.

6 cups cooked beans.  I used Great Northern beans, but you can use whatever beans you like.  Kidney beans are fine too.

4 slices of bacon, uncooked, and cut into small pieces

If you are cooking your own beans, soak and pre-cook them according to the package directions.  If you are using canned beans, just rinse and drain them before adding to the mixture.  Mix all the ingredients together then incorporate into the beans and mix well.  Pour the mixture into a large saucepan and cover with water.  Bring to a rapid boil, then reduce the heat to a low, slow simmer and let cook for at least 5 hours, or until the beans are cooked and are tender.  Don’t be surprised if your cooking time is much, much longer, especially if you are cooking your own beans rather than using canned beans.  You want the beans to be tender, and that takes awhile.  Large  beans take longer than smaller beans too.  Stir the beans occasionally to make sure they don’t burn and add more liquid to the pot as needed.  The beans will take on the rich caramel color and all the flavors of the sauce.  You can make this vegetarian/vegan too, by just eliminating the bacon.

11 thoughts on “Baked Beans for the BBQ”