Focaccia, as it is known by the Italians, is known to the French as fougasse.   Focaccia is a flat bread usually made with olive oil and simple ingredients.  It comes in many different shapes and forms.  It can be round or rectangular; thin and crunchy, high and soft or somewhere in between; it can also be crisp or chewy.   You can top it with simple toppings or make it is elaborate as you like.  It can be used as either a sweet or a savory dish, and is eaten at any time of day, anywhere you go.  As I have said many times, use your imagination and make it how you like it.  You can even fill it or use it for a sandwich.   Focaccia’s famous cousin, pizza, is similar, but unlike pizza, focaccia is never served hot, right out of the oven.  It is best when served warm or at room temperature.   Focaccia gets its name from the Latin word focus, or fire, and it’s adjective focacious meaning “cooked with fire”.   It dates back to the times of the Ancient Romans, and they often offered it to the Gods as a sacrifice.   Different varieties of focaccia are found all over Italy, but the region most famous for its focaccia is Genoa, in the Liguria region.  This is the region stretching in a thin arc from the French border to the northern edge of Tuscany.  Savory varieties of focaccia are found in every seafaring region of Italy, whereas breads that rise, or levened breads, are found more throughout the interior of the country.  Focaccia goes by many names, such as schiacciata, stiacciata, or ciaccia in various parts of Italy.  All these names mean flattened.  In Venice, it is known as fugassa which means cooked under the ashes.  However you want to say it though doesn’t really matter.  By whatever name it goes by, we just know it as delicious.   So Mangia!

I am most definitely a bread person.  I love breads of all kinds and can easily make a meal of nothing but bread, either with olive oil or butter, or simply on its own.   I made the caramelized onion marmalade yesterday, and had just enough left over to make this fabulous focaccia.

First, I made the starter or the sponge, which was 1 tsp yeast, 1/2 cup of warm water (between 105-115*F) and 3/4 cup flour.  Mix the water and the yeast together and let sit for about 10 minutes before adding the flour.  Then mix in the flour, cover tightly with plastic wrap and let sit for 45 minutes and the sponge has doubled in size.

Once the sponge is ready, add it to the rest of the dough.  Cover it and let it rise for about 1 1/4 hours, or until doubled in size once again.  This is called the first rise.

After the first rise, add a little cornmeal to a greased 11×17 baking sheet, then press your dough into the pan, filling it as much as possible.  If the dough is not stretching, let is sit for about 10 minutes and start again. 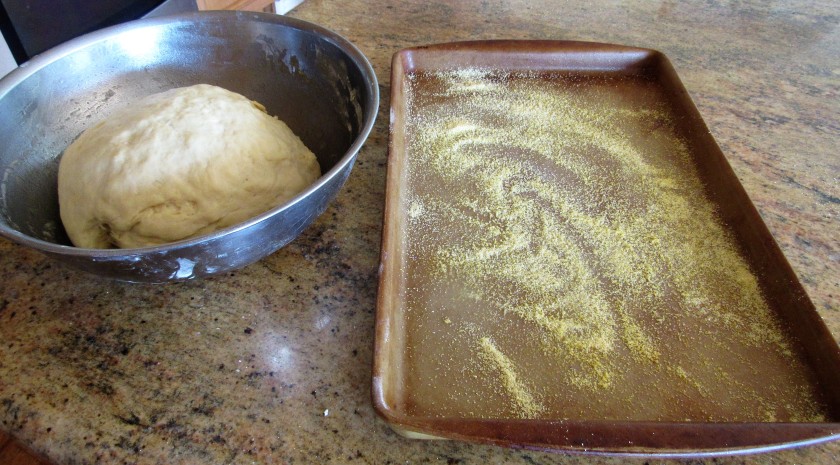 Let the dough rise again for about 1 more hour.  This is the second rise.  Once it has risen again, dimple it with your fingers, drizzle it with olive oil and add some coarse salt and your topping.  Bake at 400* F for about 25 minutes or until lightly golden. 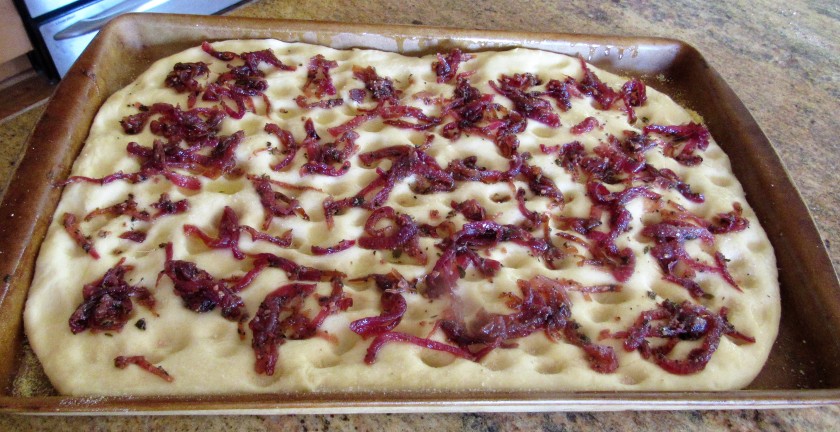 Sprinkle the yeast over the water and whisk it together.  Let it sit for about 10 minutes or until frothy and creamy.  Stir in the flour and cover tightly with plastic wrap.  Let double in size for about 45 minutes.

Start your dough the same as the sponge.  Sprinkle the yeast over the water and whisk it together.  Let it sit for about 10 minutes or until frothy and creamy.  Add 1 cup of the flour and mix in by hand.  Once the flour is incorporated, add the rest of the flour and mix in.  On a lightly floured surface, knead the dough together to form a ball for about 8-10 minutes.  Cover and let it rise for 1 1/4 hours or until doubled in size.

After the dough has risen, it will be soft, sticky and delicate.  Flatten it out onto an 11×17 baking sheet that has been sprayed with cooking spray.  If the dough is not cooperating, let it rest for about 10 minutes and then start again.  Stretch the dough to cover the pan.  Cover and let rise once again for about 1 more hour.

Heat the oil in a medium hot skillet and add the onions and the sugar.   Cook for about 35-45 minutes or until the onions are soft and tender and slightly browned, stirring occasionally.  Once the onions start to caramelize, they will brown very quickly, so watch them carefully.  You do not want them to burn.  Add the rest of the ingredients along with 1/4 cup of water and cook for an additional 3 minutes or until the sauce begins to thicken.

*** You can use any topping you like.  I made mine with a caramelized onion marmalade.