After our hockey party, The Celebration Feast we had quite a few leftovers.  You saw what I made with the left over chicken and linguisa Chicken and Sausage del Diablo but that only used some of our leftovers.  There were plenty more.  Being the “Queen of Leftovers”, I had to recreate and re-use more of the leftovers, and make them into something totally different than what they were the first time around, or my reign as Queen might just be in jeopardy.   Some of the other leftovers from the party were the smoked pork loin with cherry chutney, which I cut up and added to some leftover rice.  I also added some toasted almond slivers and made them into empanadas.  I make empanadas quite often.  Sometimes I fry them, while other times I bake them.  It really just kind of depends on how I am feeling at the time, and whether or not I want to turn the oven on.  This time, they were fried.  I actually prefer the fried version slightly more than I do the baked version, but essentially, they are about the same.  Although the baked version has slightly less calories than the fried version, so they are a bit healthier.

There are many different recipes that you can use for the empanada dough, but I prefer my tried and true basic go-to, master dough, that I use for so many recipes.  Just with so many of my dishes and recipes, there is no right or wrong way of doing things.  Use what works for you.  If you have a recipe that you like, and you are comfortable with, use that.  Like I tell my students and my swim team, just think of me as a guide, and do what works best for you. 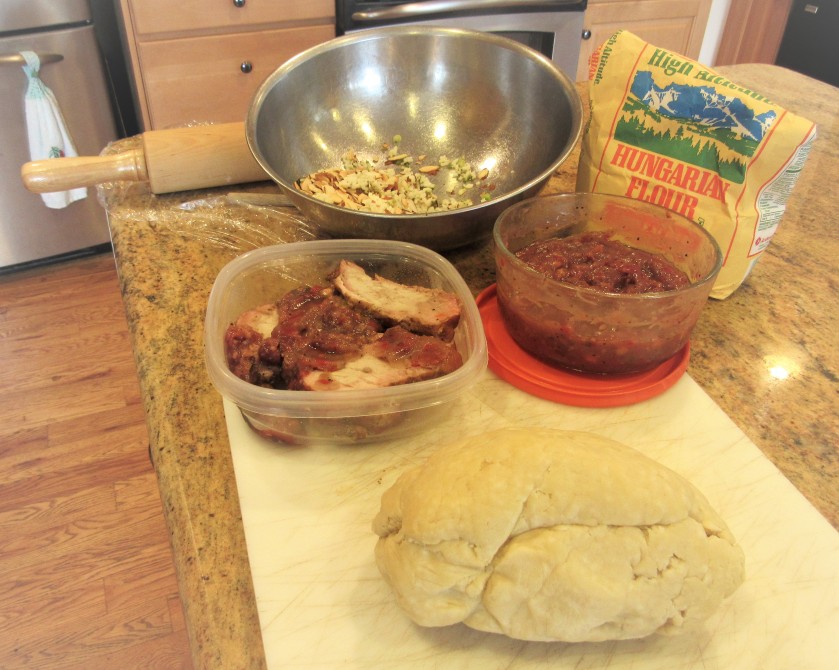 The key to real light, crispy and flaky empanadas is to roll them out thin.  You want them to be thin, but not to thin where they break apart and do not hold your stuffing.  I rolled them out to about 1/4 ” in thickness.  I added about 1 1/2 heaping TBSP of filling per circle, then carefully pinched them together.  After tightly sealing them, I pressed them down with a fork to tighten the seal even more. 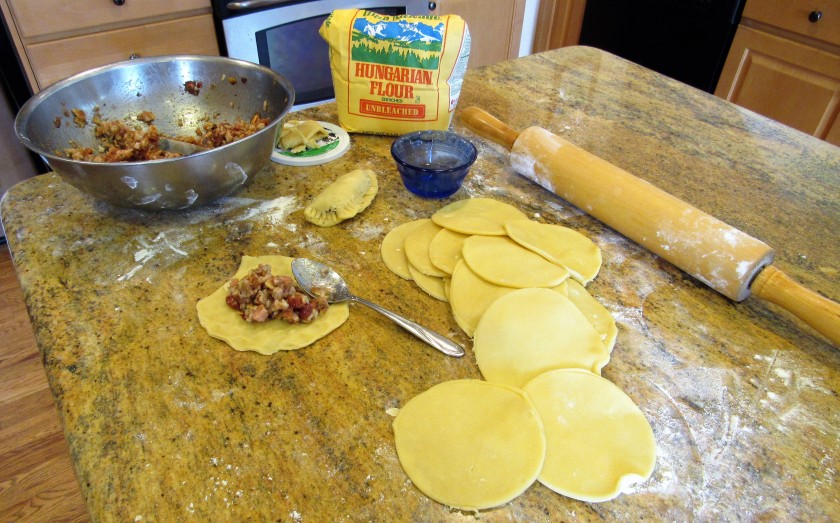 Empanadas can be filled with anything you like.  They can be sweet or savory.  You can bake them or you can fry them.  Again, there are many different ways to make them.  Be creative, and try them many different ways.  If you are baking them, brush them with an egg wash before baking so they will brown up to nice golden brown.  I actually was planning on baking them, so I added my egg wash, but while I was at work, my husband fried them instead.  Oh well.  No need to fret about it.  They still came out delicious.

a pinch of salt

Mix together the flour, butter and salt in a food processor until everything is well incorporated.  Then add the egg and the cream and mix everything together until the dough forms into a ball.  Remove from the food processor and wrap in plastic wrap.  Let the dough chill in the refrigerator for at least 30 minutes before using.  The dough will keep up to about 3 days in the refrigerator.  When you are ready to use your dough, let it come to room temperature before rolling it out on a lightly floured surface.  I usually add a little flour to my rolling pin as well.  Then roll to your desired thickness and and shape it however you like.  I use this same recipe for my tarts as well.  If I am making a sweet tart or dough, the only difference is that I also add about 3 TBSP of powdered sugar.  This is called a pate sucre.  Sometimes, when I am making a savory dough, I add black and/or lemon pepper and other spices to my dough as well.  Again, be creative and use your imagination.

I doubled my dough recipe for my empanadas.

8 thoughts on “Have No Fear, the Queen of Leftovers is Here”