Enchiladas are a Mexican staple and are found everywhere Mexican or Tex-Mex foods are found.  We have all seen and enjoyed them, but most of us don’t know the history of the enchilada.  Enchiladas originated in what was known as the Valley of Mexico in Mayan times, and is now known as the Yucatan region of Mexico.  They were a staple of the Mayans.  The poorer people ate corn tortillas or flattened bread, wrapped around small fish.  But the enchiladas, or papadzules as the Mayans called them, were originally served to the nobles on special occasions.  They were corn tortillas, known as tlaxcalli to the Mayans, and were dipped in pumpkin seed and rolled around boiled eggs, smothered in tomato sauce.  When the Spanish conquistadors came to Mexico, they transformed the enchiladas more to how we know them today.  The word “enchilada” came from the Spanish word “enchilar”, meaning to add pepper to or to season or decorate with chile.  The recipe for enchiladas was written in the first Mexican cookbook, El Cocinar Mexicano, published in 1831.  Today, enchiladas are found everywhere, with many different versions and styles.  You can roll them, as they were done traditionally, or you can layer them.  They can be served with many different sauces and fillings.  They are mostly a savory dish, however, you can make sweet enchiladas as well, using bananas or other fruits or other sweet concoctions that can also be used as fillings.

I make enchiladas both ways, but I tend to layer them more often than rolling them.  I think the main reason I tend to layer them is because I like “lots of stuff in my stuff” as my husband would say, and I am able to get more filling in by layering them rather than by rolling them.  You can also use the traditional corn tortillas, or flour tortillas.  I prefer flour tortillas because I like the taste better.  But there is no right or wrong way to make enchiladas.  Use your imagination and be creative.

Today, I made chicken enchiladas with spinach, mushrooms, and roasted peppers. 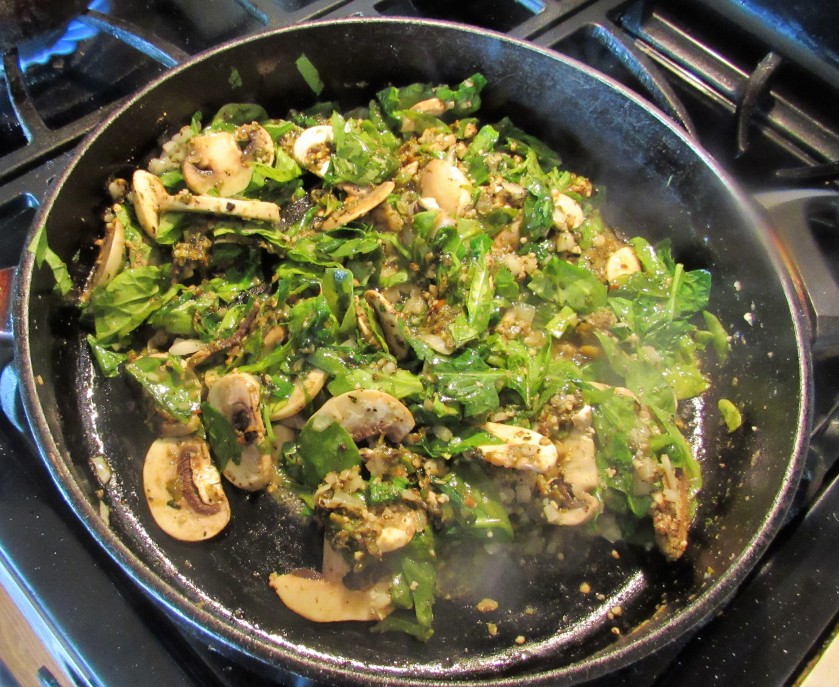 After spraying your baking dish with cooking spray, add a little sauce to the bottom of the pan before adding your tortillas.   I used two kinds of cheese.  Today, I used shredded cheddar and shredded mozzarella.  Sometimes I use jalapeno jack.  It depends on what I have on hand at the time.  You can use whatever type(s) of cheese you like.

Layering my enchiladas.  1) Sauce on the bottom of the pan; 2) tortillas; 3) cheese; 4) chicken; 5) spinach and mushroom filling; 6) repeat until pan is filled then top with cheese, cover with aluminum foil and bake. 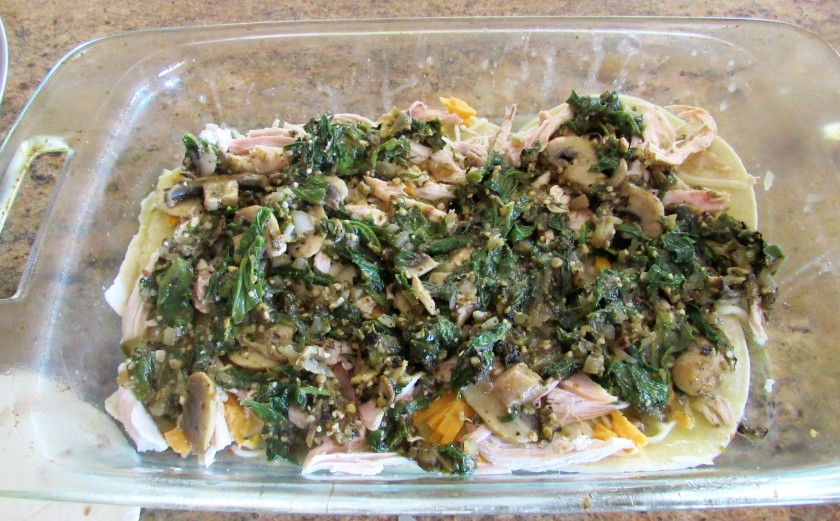 Chicken Enchiladas with Spinach and Mushrooms

tortillas, either corn or flour

Saute all the vegetables together then set aside.   Add a little sauce to you baking dish.  If layering, start with your tortillas, then cheese, chicken, vegetables, and repeat until the pan is full, finishing with cheese on top.  If you are rolling the tortillas, warm your tortillas in the microwave for about 15-20 seconds, then add your filling and tightly roll, placing the rolled tortillas side by side until the pan is filled and top with sauce and cheese.  Cover with aluminum foil and bake for about 30-40 minutes, covered.  Remove the foil and top with your toppings and continue to bake uncovered until all the cheese is melted and the toppings are set, about 5-10 minutes.  Defruitas con una margarita (o dos) frio y fresco.

23 thoughts on “Chicken Enchiladas with Spinach and Mushrooms”