Barley is one of those coveted cooking gems that not a lot of people are familiar with or know much about, although it is one of the most widely consumed grains today, only most people don’t realize this.  Barley is used a lot in beer, and we all know how much people love their beer.  It is a whole grain and can be found either hulled or pearled, which are the two most widely used processes for preparing barley for consumption.  Barley was one of the first ever cultivated grains.  It has a nutty flavor and a chewy pasta-like consistency.   It is a whole grain that is filled with fiber, vitamins and minerals that all have numerous health benefits.  Eating a diet rich in whole grains helps prevent the risks of obesity, diabetes, heart disease and cancer, as well as a host of other health problems.  Diets rich in fiber are widely recognized as important for weight loss and weight control because fiber acts as a “bulking agent” in the digestive system which helps increase the satiety level; meaning you feel fuller for longer and therefore eat less.  Although when increasing your fiber intake, make sure to also increase your fluid intake as well, to help prevent digestive problems.  Barely contains gluten, so if you are gluten intolerant, this may not be the choice for you, but there are plenty of other whole grains available that do not contain gluten.

Still trying to beat the heat and be creative at the same time, I came across a delicious sounding recipe, but me being me, I tweaked it and then I tweaked it some more until I made it my own recipe.  I served my salad with warmed pita bread and hummus and a cool, crisp chardonnay. 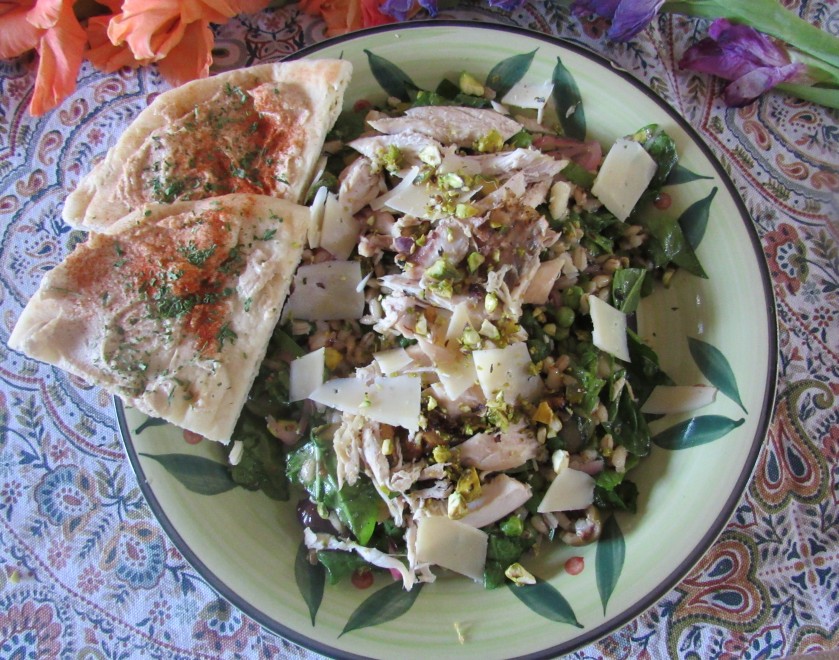 Pickling my shallots in red wine vinegar, sugar and a pinch of salt.  After the shallots have soaked in the mixture for at least 30 minutes, drain them and discard the liquid.  This makes the shallots really flavorful and adds some zip and zest to the salad. 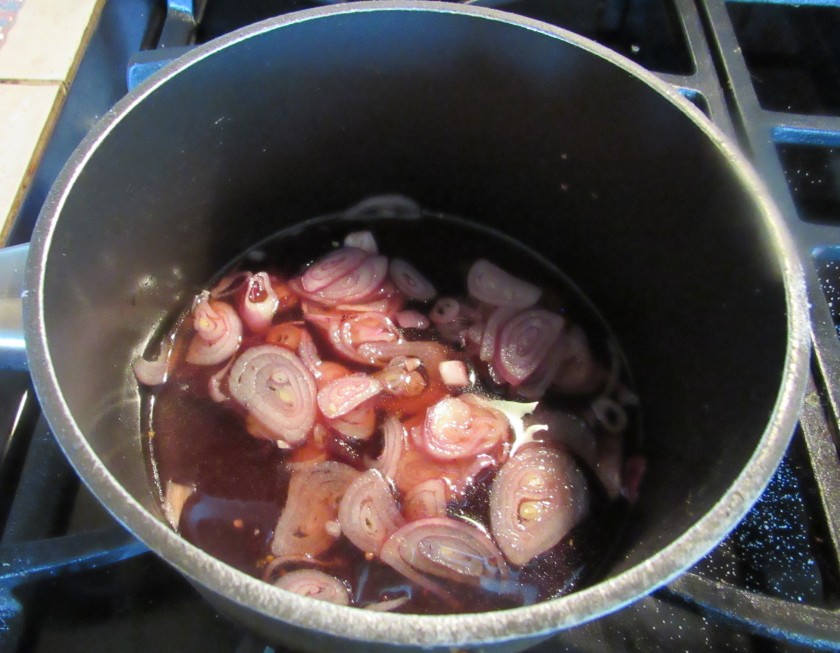 My salad components.  I have everything in a bowl ready to toss, the dressing, chicken to put on top, shaved Parmagiano cheese and chopped pistachios to top it off. 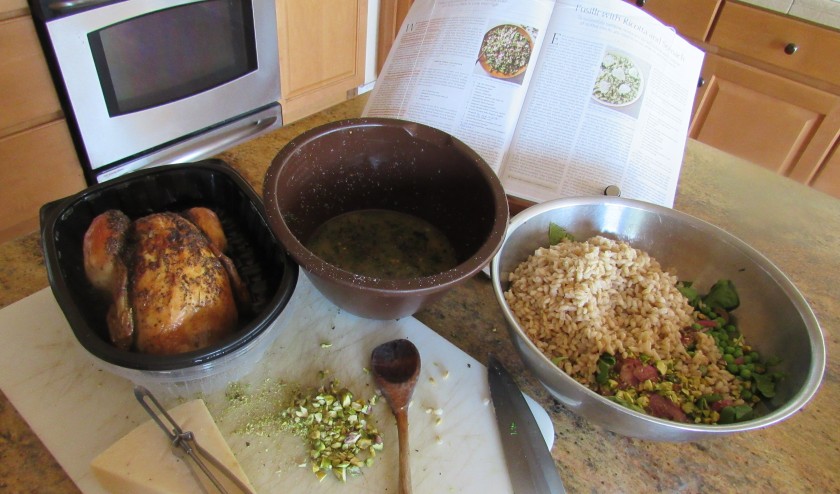 I had some left over chicken that I was going to use, however, I had a sneaky chicken thief who decided to help himself to the chicken while I was temporarily distracted, so I had to go out and buy a roasted chicken.  My chicken thief Vinnie is laying down, looking very guilty and completely satisfied with himself for his coup.  His sister Lucie tried to get in on the theft as well, but I got to the chicken before she could help herself to what Vinnie had left behind, which was not much at all. 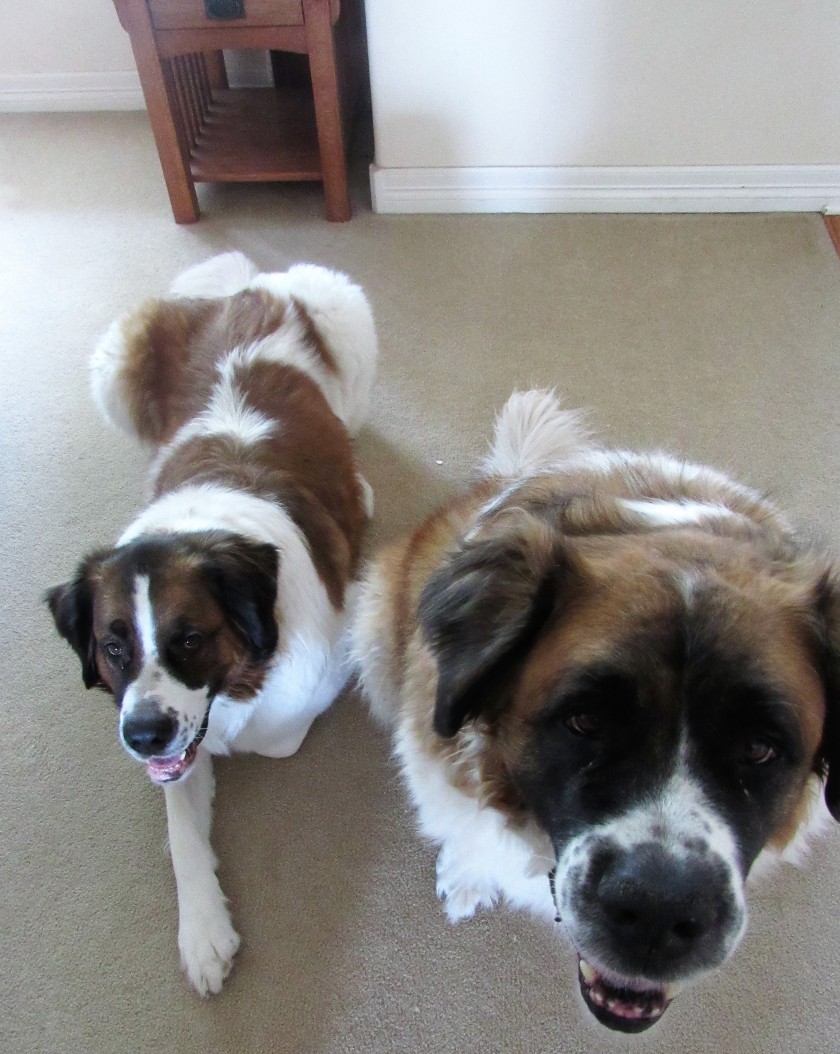 To cook the barley, use 3 cups of water to 1 cup of barley, and cook like coking rice, only let it simmer for about 45 minutes, or until all the liquid has been absorbed into the barley.

Bring the vinegar, sugar and salt to a boil, then remove from the heat and add the shallots.  Just let the shallots seep in the liquid for at least 30 minutes.  Discard the liquid when done.

Toss the barley, spinach, some of the pistachios, pickled shallots and peas together.  Then add your mustard vinaigrette, red pepper flakes and herbs and toss together with the barley, spinach mixture.  Plate this up and add your chicken or protein of choice (if using).  Top with the shaved Parmigiano cheese and the rest of the chopped pistachios.  You can prepared this ahead of time, and chill in the refrigerator before serving too.  You can also serve the salad as a side dish, without the chicken.  The mint and the lemon verbena make this salad really come to life.