According to the calendar, it is still technically Spring.  Summer isn’t here just yet.  But the temperature and the mercury are already rising, despite that fact, and it is already sweltering hot.  We are only in early June and we are already reaching temperatures in the mid 90’s here in Colorado.  If it this hot for us humans, just imagine how hot it is for our fur babies, especially those who have a double coat and thrive in cold weather.   Lucie and Vinnie HATE the heat.   The colder the better for them.  Although, double-coated dogs have a more regulated body temperature because the double coat acts as an insulation buffer to a certain degree.  So on these dog days of summer, when you and your dogs are melting, give your dogs a bit of of break from the heat with these cool, “pawdelicious” treats.  They are like doggy popsicles.  Lucie and Vinnie absolutely love them.   As much as they love them though, and they will eat them all in one sitting if you let them, definitely fight the temptation to give them too many at one time because with the coconut oil ….. well, let’s just say it will definitely clean out their systems and there will be a runny mess to clean up.

Fritzie is inspecting and putting her paw print of approval on these, making sure  everything is just to her liking.  These pawdelicious treats have only three simple ingredients – peanut butter (either creamy or chunky), coconut oil and cinnamon.  These ingredients are fairly common in most households, and they only take about five minutes to make.   These are a cool, refreshing and relatively healthy treat for your fur babies.   Peanut butter is very high in protein and relatively low in fat, which is just perfect for the dogs. 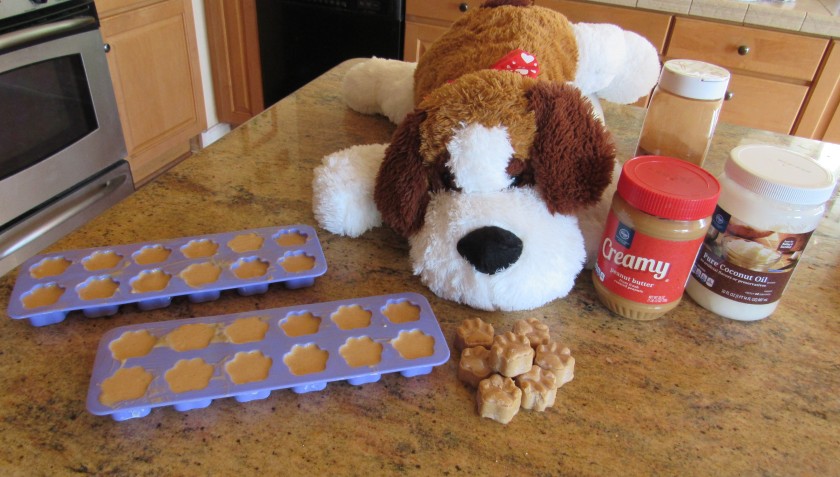 Lucie and Vinnie are also eagerly awaiting to give their paw prints of approval.

The clean-up crew hard at work.

I cup peanut butter, either creamy or chunky

Pour into molds and freeze.  Serve them frozen to your fur babies.  You will definitely get an approving paw or two after giving your fur babies these cool and refreshing treats.