Ceuta, pronounced Theuta by the Spanish, is the southern Pillar of Hercules, located on the tip of Northern Africa.  The Pillars of Hercules – Part 1 – Gibraltar  It borders Morocco and is the only part of Europe or the EU that actually borders the African coast.  The total area is about 18.5 km or about 7 square miles and it is the gateway to both the Mediterranean Sea and the Atlantic Ocean.  It is a very strategic outpost used by both the military and the commercial shipping industry.  Ceuta is 1 of 9 Spanish territories still held in Africa.  They are known as Spanish Autonomous cities. 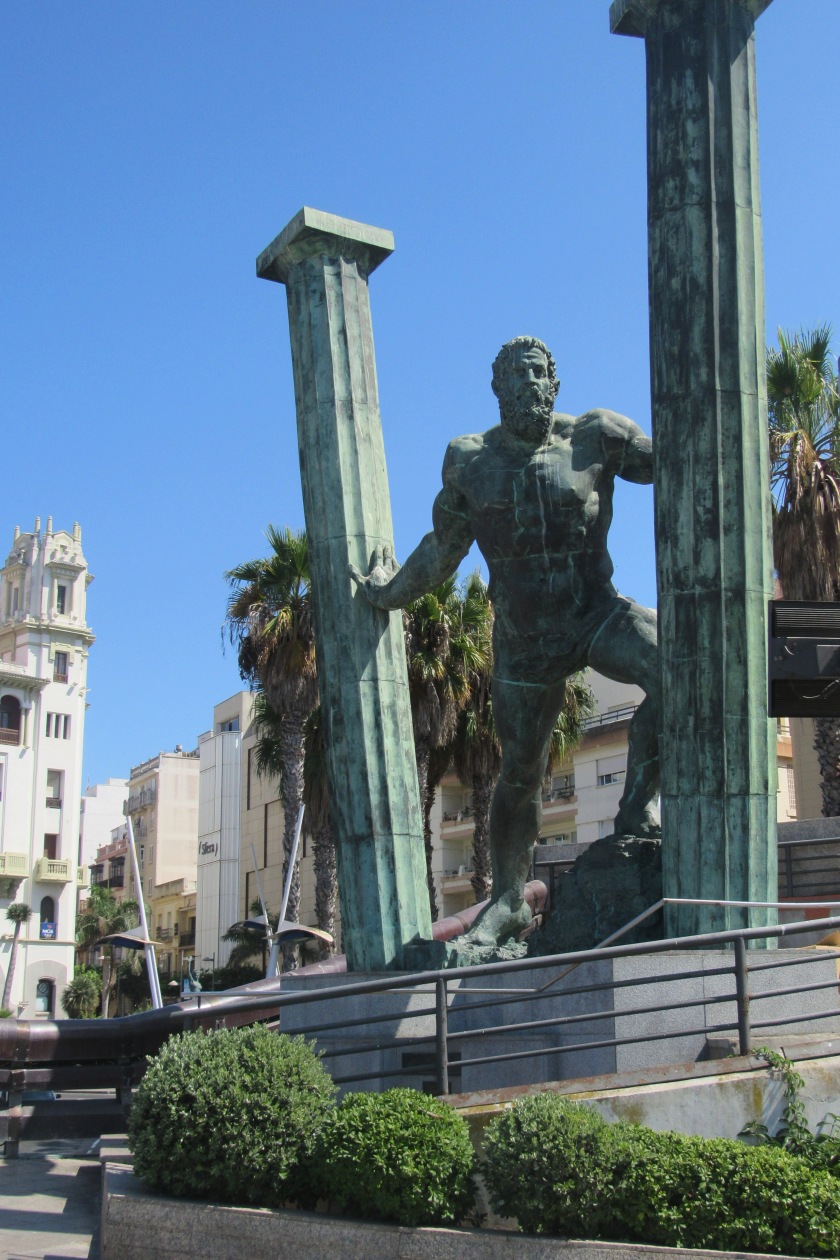 Ceuta has a very long and prolific history.  Because of its location and the fact that it is the control center for both the Mediterranean and the Atlantic, it was a hub for trade.  It was first founded by the ancient Phoenicians, back in the 1st millennium BC.  It has been under the rule of many different countries throughout its long history.  Before becoming a part of Spain, it was under Portuguese rule until 1581, when King Phillip II of Spain united Spain and Portugal under the Iberian Union, and became King Phillip I of Portugal at the same time.  Both kingdoms were allowed to continue on their own without being merged.  Ceuta officially became part of Spain with the Treaty of Lisbon in 1661, under King Afonso VI of Portugal, and has been part of Spain ever since.  Currently, Morocco is fighting to gain control over the city, and has been trying to do so for quite some time, but for now, Ceuta remains a part of Spain.  Ceuta has slightly more than 85,000 people who call the city home.  In 2005, the population was almost 1/2 Spanish and Christian/Catholic and 1/2 Muslim.  Today, the demographics have changed and it is about 68% Catholic and 28% Muslim.  The official language is Spanish, although about 40-50% of the citizens speak Darija Arabic, which is Moroccan in origin.

There are many statues and tributes to Ceuta’s long history with the sea.  The Ceutatians are very proud of their seafaring history.

As an avid scuba diver, this statue found a place in my heart. 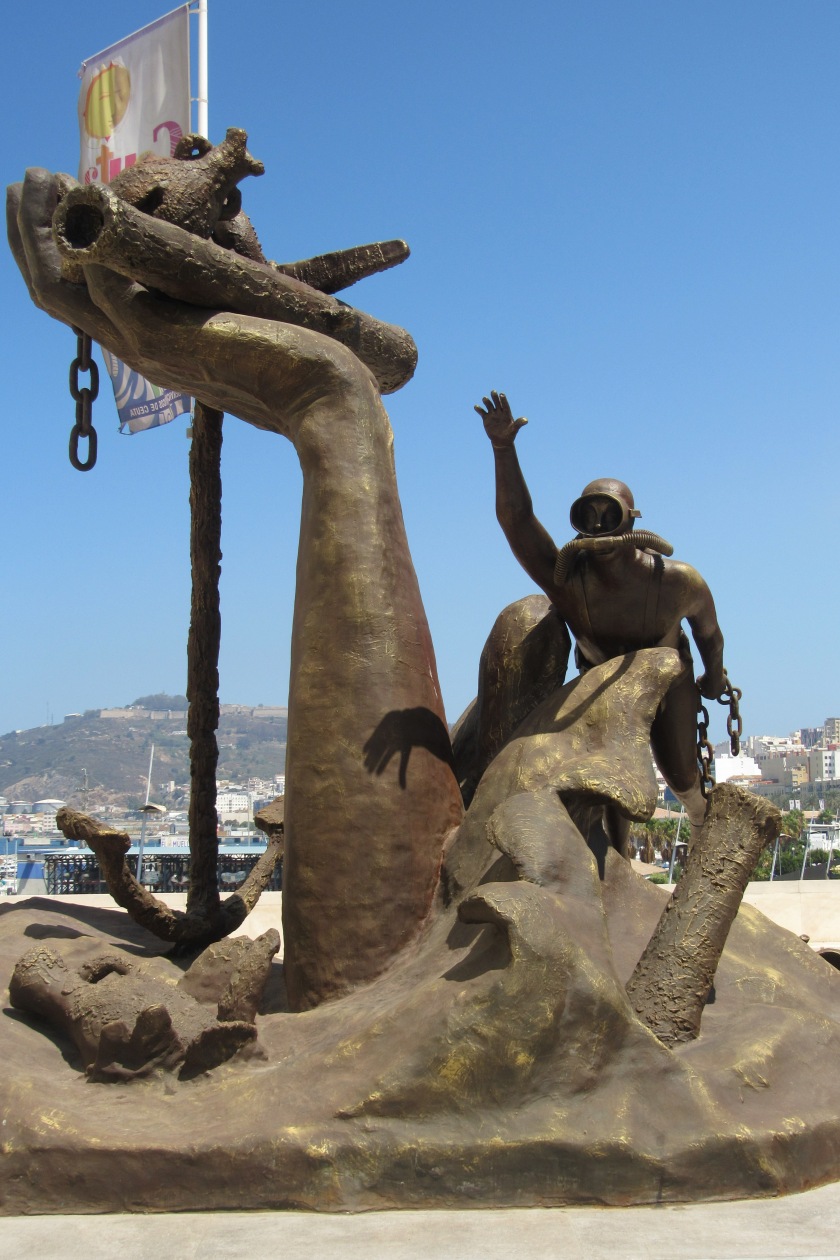 Going in to Ceuta, we took a helicopter.  It was only about a 10 minute helicopter ride from the port of Algeciras, and neither one of us had ever been on a helicopter before.  We had also never been to Africa before either, so this was two firsts for us at the same time. 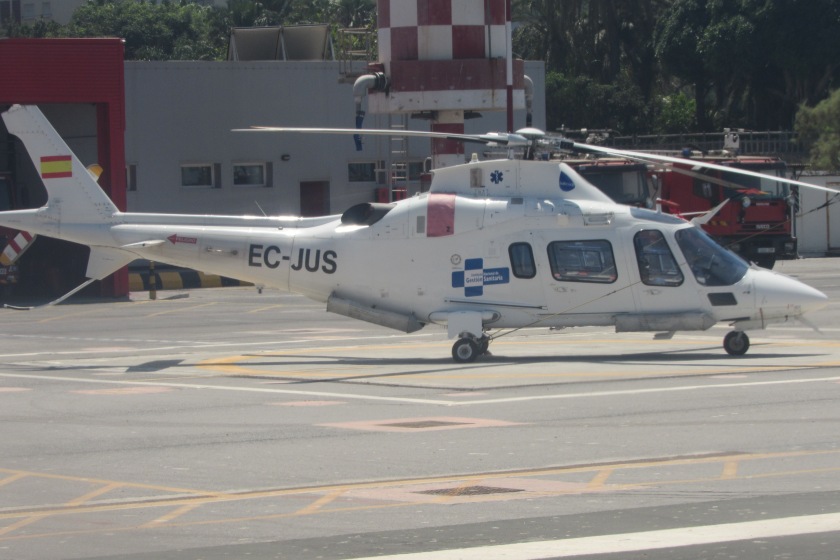 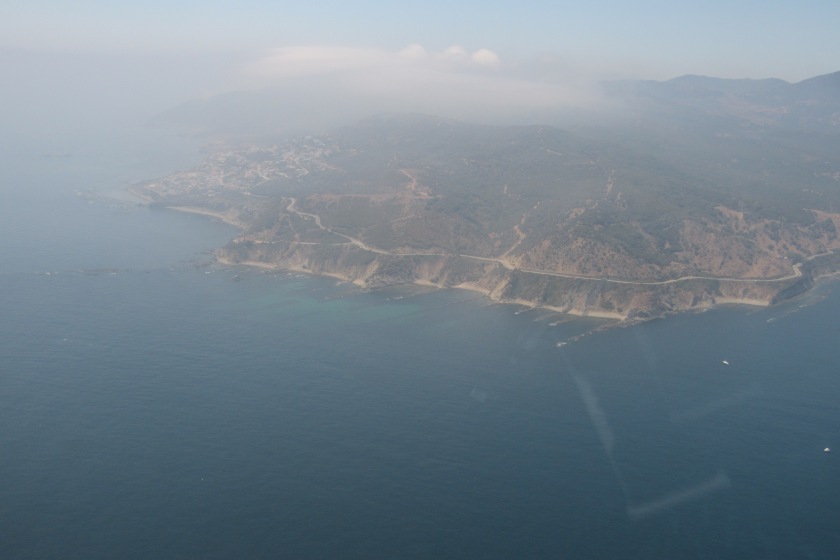 I think this picture captures the blending of the very old, ancient times with modern times perfectly.  My picture does not capture it, but the water was a beautiful emerald green.

We covered and saw a lot of Spain.  In total we drove over 1600 miles or about 2600 km.  I fell in love with Spain, but I was really not that impressed with Ceuta, sad to say.  I was real excited about the helicopter trip going over, and the fact that we were able to touch ground in Africa, a new continent to both of us, but overall, I found Ceuta to be very dirty and not particularly friendly to tourists.  There was a lot to see, and definitely a lot of history, but the city is not really designed for tourism.  I’m glad I went, but once was more than enough for me.

We went back to Algeciras by the ferry.  That crossing was pleasant on the smooth sea, and took about an hour.  This ferry is not the one we took, but you get the idea.  This one was the ferry that took people on the longer cruise to Tangier.

On our drive back to Costa del Sol, we stopped at a delicious Indian restaurant, called Mini India, for a fantastic Indian dinner.  The owner Parvis, was a delight.

Parvis is the tall, elegant gentleman in the center.

Dinner started with an Indian flatbread and three different sauces.

The main entrees were spinach rice, garlic naan bread and chicken and mango curry for me and lamb vindaloo for Larry.  Everything was fantastic and the service was impeccable.

We always like to order something different so we can share and get a better variety and sampling of the foods.